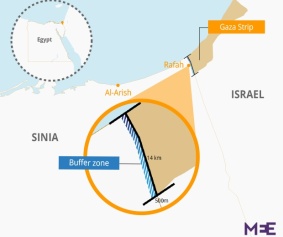 As usual, truly important developments are obscured by the daily crush of events. Horrific crimes in Jerusalem and the backing-and-forthing of cabinet meetings grab the headlines. Meanwhile, the following phenomena are unfolding, largely ignored:

President al-Sisi of Egypt continues to surprise us–pleasantly. Egypt has expanded its Gaza isolation zone to a kilometer from the border, creating greater security for Israel as well and exposing the total hypocrisy of the outside world. If Israel did or even threatened to do something similar, the outcry would be deafening and there would probably be a Security Council resolution the US would be hard-pressed to veto. Additionally, however, in interviews with French TV and during his visit to Italy, the president stated that Egypt will protect Israel from attacks from Egyptian territory and would be willing to send troops to Palestinian areas “…to assist the Palestinian police in preventing attacks on Israel”. The implications of this are very significant. What he is saying in effect is that Egyptian soldiers would occupy any Palestinian state to make sure that terrorist groups cannot operate effectively. Since in any sort of settlement Israeli troops would remain in the West Bank, the two countries would cooperate to protect each other from Palestinian-based terrorist attack.

In the meantime, the Islamic State (IS) succumbed to the ancient Greek psychological malady of “hubris”. Having overrun most of northern and western Iraq and eastern Syria and proclaimed a new “Caliphate”, IS took the entirely unnecessary and counter-productive step of beheading Americans and publicizing its barbaric acts. This brought a very reluctant US Administration into the battle against the IS. Coalition air strikes have achieved at least three objectives. They have enabled the hapless Iraqi army, with the help of Shi’ite militias, to retake the offensive. They have also prevented IS from what had originally seemed like an easy conquest of the Kurdish town of Kobane on the Syrian-Turkish border, and finally, and perhaps most important, reduced substantially IS’s main source of financing by destroying an oil refinery IS had been using to sell petroleum abroad. In a very short time, IS has gone from seeming invincible to showing increasing vulnerability.

The UAE issued a new list of terrorist organizations affiliated with the Muslim Brotherhood, including two in the US, which is causing major heartburn in Washington since both NGOs are favored by the Obama Administration as interlocutors with the Muslim-American community and several of their members hold significant positions within the Administration. Again, score one against the hypocrites.

Finally, finishing on a pessimistic note, two recent studies have shown that the 74% of the world’s GNP that is located in the export-dependent countries is stagnating or actually declining, while dependence on a single market, the United States, is increasing, which is likely to increase social and political unrest in at least the European Union, Russia and Brazil. Already the initial signs of such widespread unrest are emerging. Another study demonstrates that economic inequality in the US has reached the highest levels since the 1920’s. The top 0.1% (that’s one tenth of one percent) of the American people hold the same amount of wealth as the bottom ninety percent, with the bottom fifty percent having no net wealth at all, which correlates with the fact that about fifty percent of the populations is now dependent in whole or in part on government handouts. This suggests that the slaughter of the Democrats in the recent midterm elections may be not so much a triumph of the Republicans as an indication of disgust with the current social and economic environment in general, so that if the Republicans had been in power, they would have been the objects of public anger instead. Such tendencies in its most important ally are surely a danger sign for Israel.

Both the opportunities and the dangers for Israel in all these developments are great. Opportunities abound to make the country more secure and prosperous, but attention must be paid and policies and programs developed and implemented to take advantage of them.

* This article was published on Globes Israel on November 24, 2014.