Egypt at a Crossroad, Again 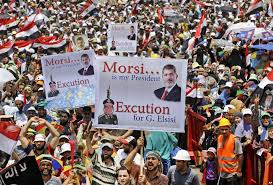 It appears that exercising more patience and better judgment would have kept Egypt in the clutches of the Muslim Brotherhood and president Mohamed Morsi out of custody.

Acting hastily to impose the Muslim Brotherhood’s leadership on Egypt’s military, Morsi misjudjed his appointee to minister of defense and chief of the army, Gen. Abdel Fattah al-Sisi’s loyalty.

The Saudis also resented the Obama administration’s support of the Muslim Brotherhood and Morsi’s warming ties with Iran. It took more then three weeks for the administration to decide not to decide that Morsi’s removal was a military coup, thus allowing the $1.5 billion in military and economic aid to Egypt. This move will do little to help the U.S. gain back the influence it had during the Mubarak regime. It is now Saudi Arabia’s domain.

The announcement on charging Morsi with murder and conspiracy with Hamas, the Muslim Brotherhood’s Palestinian branch, will increase the Brotherhood’s violent confrontations with the security services and the army. How this is going to resolve itself is anybody’s guess.

Facing One’s Demons: The Egyptian Military and the Brotherhood at a Crossroads
By James Dorsey