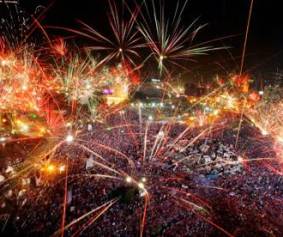 Happy Thanksgiving to our American readers!

Egypt designated the Muslim Brotherhood as a terrorist organization in December 2013. The designation was reaffirmed by an Egyptian court earlier this month, as was the order to confiscate its assets.

Now, Egypt seems ready to go further by banning the subversive influence of ‘Political Islam,’ the oxymoronic invention of the Muslim Brotherhood, which has been adopted by all Islamist Sunni and Shi’a movements.

Today, the Egyptian fact-finding committee that investigated the violence that plagued the country after the ousting of the “Islamist president ‎Mohamed Morsi” issued its report. It accused not only the Muslim Brotherhood of having a “distorted conception” of and “hijacking” democracy, but concluded that all Islamist parties are intolerant and undemocratic and should be banned.

Recognizing the role of the Muslim Brotherhood, which while presenting itself as tolerant, have been preaching violence, the report also established that the 52 churches that were completely or partially destroyed ‎during the violence that ensued after Morsi’s removal “were ‎mounted after fiery speeches by Muslim Brotherhood ‎leaders [who] incited violence against Christians, their churches and ‎property.”

Other stability-seeking Middle Eastern countries have been taking actions against the activities and influence of the Muslim Brotherhood. Last March, Saudi Arabia designated the organization, which it previously banned, as terrorist. The United Arab Emirates went further with a sweeping designation as terrorist not only the Muslim Brotherhood, but also eighty one of its ideologically affiliated groups and organizations around the world, including Hezbollah and the North American CAIR and Muslim American Society (MAS).

Recognizing this threat, the Egyptian Committee concluded, “The ‎lesson we must learn from this experience is that ‎political Islam forces must not be allowed to exercise ‎politics in this country.”