Left: Fatah memorial poster to an attacker with the Dome of the Rock in the background. January 25, 2015

The sensitivity to criticism of the Islamic fundamentalist attitude on the “death for Allah” concept, which has been fully adopted by the Palestinian cultural code, is a further instance of our difficulty in understanding a different culture, which leads us to project our values onto the other in a mirror-perfect image.

President Barack Obama exemplified this mindset in his 2009 Cairo address and his address in Jerusalem in 2013 when he said there was no real difference between his daughters and the Palestinian youths he had met in Ramallah or the Egyptian youngsters he had encountered in Cairo. And that they, as his daughters, wanted to get an education, worship God in their way, raise a family, and make a good living, even if there were political or religious differences between them.

Really, Mr. President? Do your daughters identify on Facebook with the worldview of radical Islam, which calls on one to seek “death for Allah”?

Palestinian youth indeed wears jeans and do not look religious. Almost every Palestinian child you ask will tell you he wants to be a shahid [martyr], and many believe that by attempting to stab a Jew-Zionist to death they increase their chances to attain that honor. This is a direct result of the education they receive.

The Tenet of Dying for Allah

According to radical Islam and the distorted way in which its tenets have been harnessed to the Palestinian national struggle, “death for Allah” is an important value. The main message of the Koran is that life’s purpose is to help one realize that the universe was created by Allah; one can then bear witness that there is no other God than Allah and Muhammad is his last emissary. Those who do so in this life will merit being in heaven in the next world, which is the truly important world, until the resurrection of the dead. Those who devote themselves to spreading this message, while fighting the enemies of Allah and Satan’s endeavor to convince people that there is no God and what matters is worldly happiness, will win further favors in heaven including the renowned virgins, especially if, during this struggle, one sacrifices one’s life and becomes a shahid.

Two verses from the Koran, often used in proclamations by the Palestinian organizations that glorify terrorists recently killed while carrying out attacks, explain an aspiration that to us seems to contradict human nature: to commit murder while risking one’s own death. One of these, verse 169 of the House of Imran surah, states: “Do not think of those who die for Allah as dead, for they are alive and receive their sustenance from their Lord.”

The distortion involved in the use of this verse concerns the assertion that it descended (according to Islam, the verses of the Koran descended from Heaven and were given to Muhammad by the Angel Gabriel) in the context of a regular war, the Battle of Uhud, which Muhammad waged against members of his tribe, Quraysh, along with his followers, some of whom had left Mecca with him while others were from Medina. When these followers feared taking part in the battle, there was a need to boost their spirits.

There is, of course, no similarity between that war and inhuman attacks on innocent people that are justified in this fashion. 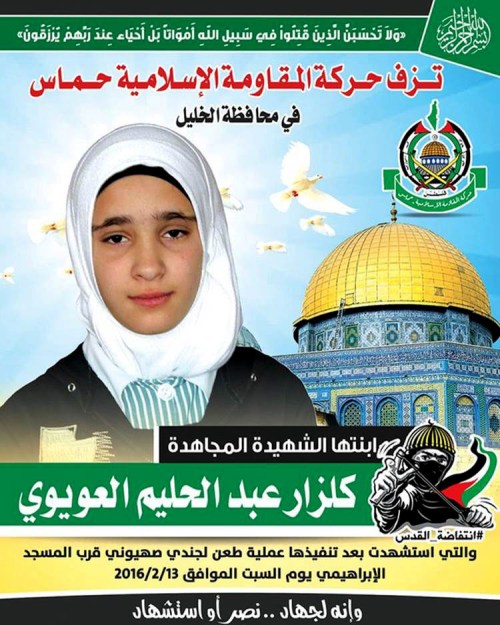 Hamas poster memorializing a girl-stabber. Background of the Dome of the Rock and heavenly doves

The second verse, verse 39 of the Al-Hajj surah, which Mahmoud Abbas himself invoked to ignite the terror wave of the second half of 2014, states: “Permission is given (to believers) who are being fought against, because they have been oppressed, and Allah can help them and bring them to victory.”

Most commentators think the reference is to permission for jihad, that is, holy war. Yet here, too, it is evident that there was no intention to justify attacks on the innocent, a point emphasized in a similar verse, verse 190 of the Cow surah, which makes clear that one should not go too far in battle: “And fight for Allah against those who fight you, but do not cause harm (more than is needed), because Allah does not love aggressors.” Interestingly, almost no use is made of this cautionary verse.

In the internal Palestinian discourse, the struggle against the Zionists is not only a national one but also an Islamic struggle for Allah against those who fight and oppress the believers. Indeed, in their view, the Zionists are trying to steal land that belongs to Islam and are a colonialist extension of Western culture, which views achieving happiness in this world as the goal of life. Whoever dies in the struggle against Zionism is, then, entitled to special regard. He has taken part in defending Islamic land with its sanctities, or what is called ribat (the source of the term mourabitoun for those who defend the Temple Mount).

As for the perpetrators of attacks, who actively seek to be shahids, they win the highest status. A favored place in heaven is promised them, and their death is described as a marriage ceremony. For the Palestinians, this is a double and even multiple reasons for joy: the Shahid gains a place in heaven along with recognition of the fact that he used life to the full by becoming a martyr, plus honor, status, and financial rewards for his family. All these compensate for the natural sorrow of the loss.

Of course, Palestinians love their children as any human being and are against death that is outside the framework of the struggle against the enemies of Allah and the believers. However, unlike the Western preparedness to sacrifice oneself for a higher purpose, while making an utmost effort to avoid the loss of life, radical Islam and the Palestinians view “death for Allah” as a great privilege to be blessed with. Nor do they see prolonging life, let alone achieving happiness during it, as a supreme value. For them, the aim of fulfilling the Islamic commandments and engaging in proper conduct is not to reach the condition of “Who is the man who desires life, and loves many days, that he may see good [Psalms 34:13],” but to ensure a place in heaven.

* This is the JCPA English translation of the article that appeared in Ha’aretz in Hebrew on March 20, 2016.