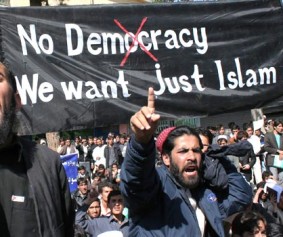 Islamism has been accepted by the West as simply another political point of view, and its growing efforts and sometimes violent acts to force its dictates has been met with little, if any resistance especially since September 11, 2001.

On May 23, 2014, the Sunday Review of the New York Times published an op-ed by Shadi Hamid. In “The Brotherhood Will Be Back,” the author, a fellow at the Brookings Institution’s Saban Center, put political Islam’s cards on the table:

“Liberals would say that their solution is the only acceptable compromise. In a liberal society, everyone—secular and Salafi alike—can freely express their religious preferences. But the notion that liberalism is ‘neutral’ can be accepted only within a liberal framework. Islamists cannot fully express their Islamism in a strictly secular state.”

While subtly making the usual arguments about moderate and extremist Islamists, Hamid points out Islamism’s growing role in the Arab Spring phenomenon.  And since the majority of people in Muslim countries, he claims, believes in the superiority of Shari’a Law, it ought to be the law of the land whatever the political regime.

Mohammed Morsi’s ouster in Egypt should not, therefore, be regarded as a meaningful expression of popular will against theocratic dictatorship. After all, like all Muslim Brotherhood supporters, Hamid reminds us that Morsi was democratically elected. He does not consider the popular uprising, the will of tens of millions of Egyptians demonstrating to remove Morsi, to mean anything.

Hamid, like Anwar Ibrahim — the failed Malaysian politician who’s similar gibberish to promote ‘Democracy according to Islam’ won him many influential friends among Western political elites — argues for Islamic democracy ( an oxymoron). He says that “contrary to academic and popular wisdom, [democracy] is likely to push Islamist parties toward greater liberalism. In religiously conservative societies, there is widespread support for more mixing of religion and politics, not less.”

Hamid’s main point, apart from softening his readers’ cold hearts regarding the Brotherhood and Islamists everywhere, is to argue “the fundamental inability of secular state systems to accommodate Islamist participation in the democratic process.”  In this, he seems to define democracy as merely an electoral choice.  He poses to the West what he calls a “thorny question”: “Do Arabs have the right to decide—through the democratic process—that they would rather not be liberal?”

If Hamid only meant to point out that liberal democracy and “Islamic Democracy” are incompatible, he’s correct.  However, he asserts that since there are Islamists, there must be “Islamic democracy” that all the world should recognize as legitimate.  Thus, it’s “the Shari’a way or the highway.”

Since the political rise of the Brotherhood in Egypt, Western liberals have chosen to believe that Islamism (not only the Brotherhood’s version but also Qatar’s—where Western tourists are now warned to dress modestly—Saudi Arabia’s and even Iran’s) tempered by power and political, economic, and social responsibility would bring the Muslim world into rough concordance with Western values.  Hamid plays upon this.  He also plays upon the West’s disaffection with itself by suggesting a fundamental weakness of secular liberalism, i.e., that it really cannot accommodate Islam.

If liberalism has succeeded in accommodating other monotheisms, polytheisms, and even atheism without fundamental and violent opposition from Christians, Jews, and the followers of other religions, then the incompatibility of liberal democracy and Islam tells more about Islam than it does about liberalism.

If some Middle Eastern states become Islamist politically, good luck to them as long as they mind their own business.  That they do so must not be seen as either the West’s fault due to it’s repressive acts of the past or to the inferiority of its political values.

If Hamid’s Brothers come back, let it not be with our help.  It’s time for the West to defend itself at home, to challenge contorted propaganda publicly, whether it comes from Islamists or Politically Correct and otherwise muddled Westerners.

The rise of anti-Muslim European and Russian nationalism, the kind most Westerners have learned to dread, should be enough to stop Western political and social accommodation of, and submission to, Islamist demands.