Death of a Terrorist: Hezbollah Operative Recently Killed in Syria* 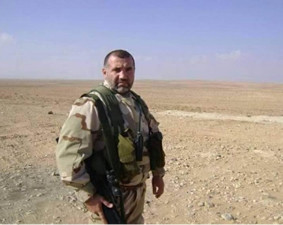 1.   On May 26, 2014, Hezbollah announced the death of Hajj Fawzi Mustafa Muhammad Ayoub (Hajj Abu Abbas). He was a senior field operative with a long history of terrorist activity abroad. According to Hezbollah he was killed while “fulfilling his duty of jihad.” There are two versions of where he died. Lebanese and Syrian media reported that he was commanding a Hezbollah force in Aleppo, and was killed there. However, “Lebanese security sources” and a Syrian source reported that he was killed in the Syrian town of Nawa in the southern Golan Heights, in the Dara’a province (Alzaman.com, albawaba.com, May 27, 2014). It was also reported that last year he was wounded in the battles at Al-Qusayr (Saidaonline.com, all4syria.info, May 28, 2014).

2.   Hajj Fawzi Ayoub was a Lebanese national with Canadian citizenship. He had previously belonged to Hezbollah’s terrorist attack network abroad; he was arrested in Romania for an attempted terrorist attack, and went to live in Canada and the United States. He returned to Lebanon and from there Hezbollah sent him on a mission to gather intelligence and carry out an attack in Israel. He was detained by the Palestinian police in Hebron and later by the Israeli security forces. In 2000 he was imprisoned in Israel and released in the Tannenbaum exchange deal.[1] In 2009 the FBI put him on its most wanted terrorist list.

3.   On May 30, 2014, Hezbollah held a formal funeral for him in the village of Ain Qana in south Lebanon. It was attended by Hezbollah operatives and activists, clerics and Lebanese public figures, including Hajj Muhammad Ra’ad, head of the Hezbollah faction in the Lebanese parliament; Mohammad Berjawi, a former member of parliament; Ali Dhaoun, Hezbollah operative responsible for the area north of the Litani river, and others. Mourners waved Hezbollah flags and pictures of senior Hezbollah terrorist operatives killed in  Syria, and chanted slogans such as “At your orders, oh Nasrallah,” and “Zeynab will not be captured again” (Alghad.com, ibna.ir, May 30, 2014).

5.   Hezbollah justifies its involvement in the fighting in Syria by calling it a battle against the jihadist terrorism of Al-Qaeda and its affiliated organizations, which, according to Hezbollah, threaten Lebanon’s security. The death of Fawzi Ayoub shows Hezbollah’s readiness to deploy its most capable manpower in the battle at Aleppo and other key locations. That included sending Ayoub, an operative with extensive experience in the organization’s overseas terrorist activities, since in any case he had been burned and could no longer carry out clandestine missions outside of Lebanon.[2]

6.   Hajj Fawzi Mustafa Muhammad Ayoub (Hajj Abu Abbas) is a Lebanese Shi’ite who was born in Beirut in 1966 and lived in the south Lebanon town of Ain Qana. He joined Lebanon’s Shi’ite Amal Movement and then Hezbollah. As a Hezbollah operative he was involved, along with two others, in the 1988 attempt to hijack an Iraqi plane in Bucharest to attain the release of Shi’ite clerics being held prisoner in Baghdad. He was caught by the Romanian authorities before he could act, but one of his accomplices carried out the attack. The hijacked plane crashed in the Saudi Arabian desert and 60 people were killed. Some months later Hezbollah managed to release Ayoub by bribing Romanian officials (Nationalpost.com, May 26, 2014)[3].

7.   After release from jail in Romania in 1988 he moved to Canada, and four years later became a naturalized Canadian citizen.[4] He married a woman from Detroit and went to work in a supermarket, and also enrolled in a university. According to the American attorney general, for a certain period of time he lived and worked in Michigan. In 1994 he divorced his wife and married a woman of Lebanese extraction. At the beginning of 2000 he returned to Lebanon with his family and opened a bakery.

8.   He returned to Lebanon on a Canadian passport and resumed activity in Hezbollah. He was trained to carry out sensitive missions abroad, and underwent training in the use of explosives in secret Hezbollah apartments in Beirut. He was taught how to hide his Lebanese identity and told to speak only English once in Israel (From the testimony of Dr. Matthew Levitt before the US Senate Foreign Relations Committee, July 25, 2012).

Hezbollah Terrorist Operatives Dispatched on Missions from Europe to Israel

9.   During the 1990s and the beginning of this century Hezbollah was responsible for a series of attempted terrorist attacks in Israel through the agency of Lebanese/Muslim terrorist operatives sent from Europe, traveling on real or false passports. In our assessment, Hezbollah’s objective was to provide backup for the efforts of the Palestinian terrorist organizations, led by Hamas, to sabotage the Oslo Accords with terrorist attacks and weaken the Palestinian Authority (PA). The attempted attacks, which were carried out by Hezbollah’s overseas terrorist squads (in our assessment in coordination with and directed by Iran) were not successful. The Hezbollah operatives sent to Israel were caught and detained by the Israeli security forces.

10.   The terrorist attacks in Israel and the PA-administered territories originating in Europe usually had a set modus operandi:

1) The first stage was carried out in Lebanon and included deciding to carry out an attack, choosing a candidate to carry it out, training and briefing him, and accompanying him to a European country.

2) The second stage was carried out in a European country where a cover identity was created and contact was made with local Hezbollah operatives. The terrorist operative received a foreign passport and preparations were made for his journey to Israel.

3) In stage three the operative arrived in Israel with his non-Lebanese passport and began his operations (gathering intelligence, making explosives and IEDs) and then carried out the attack.[5]

11.   During the time Hezbollah followed the above modus operandi a number of its terrorist operatives were detained in Israel, among them Hussein Miqdad (1996), Steven Smirk (1997), Fawzi Ayoub (2000) and Jihad Shuman (2001).

12.   In our assessment, Fawzi Ayoub was sent to Israel to carry out a showcase terrorist attack, or possibly to gather intelligence about important targets within Israel to prepare a terrorist foundation for Hezbollah operatives. During interrogation he admitted that one of his missions was to try to secure the release Hezbollah operatives imprisoned in Israel, possibly by abducting Israelis.

13.   In October 2000 he left Lebanon for an unspecified European country where he left his Canadian passport, purchased new personal effects, received a counterfeit American passport in the name of Frank Mariano Boschi, went to Greece and from there took a boat to Israel. Arriving in Israel he went to stay in Jerusalem, where he looked for places to hide weapons prepared for him.

14.   From Jerusalem he went to Hebron where he contacted local Palestinian terrorist operatives. He was detained and held by the Palestinian security services in Hebron. On June 25, 2002, during an IDF action in Hebron, he was detained and interrogated by the Israeli security forces. After his interrogation the IDF chief of staff signed an order for his imprisonment (Haaretz.co.il, October 31, 2002). In 2004 he was released by Israel and returned to Lebanon as part of the Tannenbaum exchange deal (Nrg.co.il, ynet.co.il, May 27, 2014).

15.   On August 5, 2009, a Michigan district court filed a grand jury indictment against him in absentia. He was accused of using and of attempting to use a counterfeit American passport to enter Israel to carry out a terrorist attack for Hezbollah. With the indictment he was put on the FBI’s most wanted terrorists list.

[1]Elhanan Tannenbaum, a reserve officer in the IDF, was tempted to participate in a drug deal and was abducted to Lebanon where he was turned over the Hezbollah. He was released in 2004 an exchange deal that also returned to Israel the remains of three IDF soldiers abducted in Har Dov (in the eastern sector of south Lebanon). In return for his release and the return of the remains of the IDF soldiers Israel freed 435 of Palestinian and Lebanese security prisoners.

[3]Between 1982 and 1986 Hezbollah, with support from Iran, hijacked the planes of various international airlines. They served Iranian interests, mainly in the Iran-Iraq war, but they were also intended to effect the release of Shi’ite operatives imprisoned in Israeli, Kuwait and other countries. Imad Mughnieh was the moving spirit behind the hijackings.

[4]Asked by an Israeli judge if he told the Canadians he had been involved in Romania, he said no, because they hadn’t asked him (Nationalpost.com, May 26, 2014).

[5]For further information see the November 29, 2012 bulletin “Hezbollah: Portrait of a Terrorist Organization,” the section on Israel (p. 61 ff.).