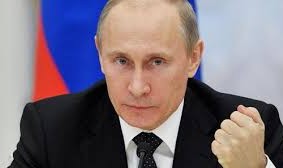 All historical analogies are odious, some dead white man – probably a Frenchman – has said. Obviously, he meant that times change, the cast changes, the nuances change, the world moves on, and no geopolitical situation really replicates an earlier one. Some historiographers go even further; they say that for all these reasons there are not, indeed, any “lessons” from history, George Santayana notwithstanding. Still …

It’s good intellectual fun to make comparisons and sometimes we learn a little by playing a game in which we compare those former events with the contemporary happening. Of course, one problem is that our reconstruction of earlier events is often skewed if not downright wrong. For, obviously, if for no other reason, we view them in the context of the present. Again, still…

That’s the case now examining Vladimir Putin’s blatant aggression and attempted subversion of Ukraine as a sovereign state. It has become the cliché of clichés to see his program of violating internationally accepted borders as the same route to war the totalitarian dictatorships took before World War II. But Putin is no Adolph Hitler, nor certainly no Josef Stalin. He has neither their talent for villainy and he heads an even more fragile economy, and indeed a political union coming apart at the seams. Yet his use of stratagems those 20th Century international outlaws used is all too obvious. One even is tempted to go along with the Polish official who said it was hard to believe Putin’s speech writers hadn’t actually plagiarized an earlier Hitler model.

So that begs the question are we on the eve of a general war such as broke out in 1939?

The year 1938 was more than usually momentous for European history, and indeed for the whole world so Euro-oriented as it was in the last century. Among the many events were two dramatic crises that captured the headlines:

Trying to head off another catastrophe like The Great War from which the Europeans have never fully recovered because of the enormous loss of life, a deal was made at a conference in Munich between the Western allies and Hitler. War was temporarily averted.

Running parallel if not directly connected, partly in anticipation of that new “world war”, Moscow moved against Finland at the other end of Europe. The Soviets were attempting to improve their defense posture, or so Stalin’s rationalization went. And, indeed, there was a proposed Allied strategy to cut off Hitler’s essential raw materials from Norway by moving into Finland, why, Hitler moved on Denmark and Norway and bought off nominally neutral Sweden.

Both negotiations had one thing in common: they both represented naked aggression and an attempt to remake the frontiers settled so painfully with the Versailles Treaty after World War I.

“Munich” was greeted with enthusiasm in most quarters. Only that poor Winston, crowing in the galleries, such a dreadful burden on his long suffering socialite mother, ranted about the Nazi threat. It took years before [British Prime Minister Neville] Chamberlain’s name [and umbrella as a trademark] became emblematic of wishful thinking about aggressive governments. [It was something of a bum rap since his predecessor Stanley Baldwin had left him with rearmament just beginning.]

On the other hand, there was universal sympathy for “the little Finns”, even in isolationist America that wanted nothing of the European entanglements it had fallen into in World War I. The Neutrality Acts of 1935, 36, 37 and 39 – some of whose features were opposed by Pres. Franklin D. Roosevelt – tried to keep American out of any conflict by prohibiting sales of weapons to combatants. But former President Herbert Hoover organized relief efforts for Finland when Moscow chose the outbreak of the “phony war” – the several months of détente after the West declared war on Nazi Germany for its September 1939 invasion of Poland. After all, Finland had been the only European country to repay its WWI war debts! [Of course, a notorious Communist fellow-traveling English professor at University of North Carolina set up a desk on the Chapel Hill campus for “Aid to the Soviet Union”; some things don’t change.]

In the end bravery and more effective use of weapons against a foe was to no avail, and the Finns called it quits after four months of humiliating defeats for the Soviets. And that was despite a three to one manpower advantage and enormous superiority in conventional weaponry. [The Finns had used ski troops, handy little versions of a Czech submachine gun, the Arctic weather they knew so well, etc.].

In all of this stew, are there things that relate to the present? Does reference to “Munich” or “The Winter War” [Finland] model lead any elucidation of the current crisis?

Maybe. For they suggest, in their own way, two possible outcomes of the current flurry of diplomatic activity, propaganda and speculation.

Czechoslovakia wasn’t exactly a model democratic state in the post-World War I environment. It was, after all, something of an artificial creation, an outgrowth of Woodrow Wilson’s absorption with ethnic nationalism. Prague had been one of Europe’s most important cultural centers, but it was as much German speaking [as a part of the Austro-Hungarian dual monarchy] as a center of the Czech language. Many of those famous Prague writers, Rilke, Kafka, Brod, Werfel, for example, wrote in German, and many were Jews. [The Jews were a “Germanizing influence” as the Czech politician Jan Marsaryk, son of the country’s founder, martyred to the Communist later, commented when asked if postwar remnants from the death camps would be readily accepted.]

And most importantly, the new Czechoslovak frontiers were drawn on what appeared natural [and defensible] lines. But it included German speaking Sudetens [named after a frontier mountain range], almost a quarter of the new country’s population, in its border areas. The Czechs had, then, similar historical ties to the German states as Ukraine has had to Russia. And just as Putin today has used the exaggerated, if not totally false, accusations Russian-speakers in Crimea and Eastern and Southern Ukraine were being oppressed, so Hitler used the Sudetens as a wedge to eventually dismember Czechoslovakia. And the extended talks before and after “Munich’ found the Western allies, particularly Britain, complicit in what amounted to the destruction of an independent state’s sovereignty. Are these seemingly endless unproductive talks between Secretary of State John Kerry and his Russian colleague Russian Foreign Affairs Minister Sergei Lavrov, which produce announcements almost immediately contradicted by Putin, a similar road to perdition?

Ironically, there are other similarities. Hitler not only picked up real estate in the demoralized Czechoslovakia, but he also laid hands on the traditional source of arms for the Austro-Hungarians Škoda. It was and is one of the most important munitions makers in the world. Some military analysts would argue without the arms he grabbed from the Czechs, enough for at least one panzer division, Hitler’s attack [in cahoots with Stalin] on Poland only a year later would not have been possible. Similarly, even after its creation as a separate and independent state with the implosion in Moscow in 1990, Ukraine retained a substantial part of the old Soviet military-industrial empire. [Even under its corrupt and inefficient governments, Ukraine’s arms exports make it No. 5 worldwide. That’s a connection the Chinese have been interested in preserving.] Moscow today is still dependent for critical elements of the relic of Stalin’s plan to unite an otherwise far-flung and diverse empire with industrial threads, which were politically potent if often uneconomic. Those ties as well as the Russian Crimean bases, continued through treaty arrangements in the Ukrainian Crimea, were an important part of Putin’s impetus.

Uncompromisingly clear is that Putin, whether he moves militarily to destroy any semblance of Ukraine’s orientation to the West, or in a more crafty way, simply seeks to create a satellite. When Kerry negotiates with Putin to determine its revamped regime, he seeks the “Munich” way.

Ironically, Zbigniew Brzezinski, national security adviser for the dovish Carter Administration, has publicly criticized his former clients, the Ukrainians, for not fighting when Putin moved on Crimea. Had they done so, or if they do so when Putin makes new demands, it recalls Helsinki’s resistance to Stalin in The Winter War. Again, Finland had a long and complicated relationship with its big neighbor, a trophy for Moscow after the Russian victory over Sweden in 1809. [Finland remains technically bilingual even today.] But the Finns joined Moscow, not as part of the Empire, but as a grand duchy with the Russian tsar their grandduke and maintained a certain measure of autonomy against Moscow pressure until it broke free during the Russian civil war which followed the Bolshevik coup of 1917. Again, a relationship of deep intimacy – as in the case of Ukraine and Russia – but one of constant antagonism.

The Finnish scene went through enormous gyrations while the rest of Europe was fighting World War II, emerged technically a loser [having been used as a base by the Nazis]. But, in one of those great ironies of history, again the hardworking Finns turned their burdensome reparations to the Soviets into a process of intense industrialization, resettled refugees from the center of their civilization in the Karelian Peninsular [which Moscow grabbed], invigorating their society. During the last years of the Soviet Empire, because of this knuckling down externally to Moscow demands, they had to suffer the further indignity of “Finlandization”, a term Western Hawks used as what post-World War II Soviet power was trying to foist on all Europe. But one could argue [and the Finns have done so quietly with their cousins across the Gulf in Estonia] that their sacrifices in The Winter War were worth it in terms of national identity and history, and that they lived to fight another day in their own way.

Is Kiev is choosing “Munich” or “Finland”? It’s far too early to know, of course. But all the signs are. Unfortunately, that the Obama Administration may have already made their choice for them.

*A version of this column will be posted on yeoldecrabb.com, Sol Sanders’ website, Monday, April 21, 2014.