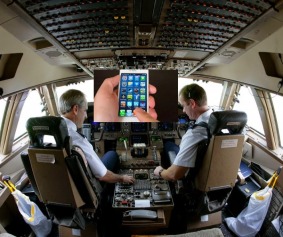 The holiday season brings new “traditional” threats to airline passenger from al Qaeda, to nontraditional threat from wireless communication devices that carried and used on board the planes. Would be terrorists may be discoverer before detonating sophisticated hidden explosives, but would not come under any suspicion for using their smart phones, tablets and PCs during flight.

However, a well trained martyr could hack into the plane’s computer system, take over all or part of the controls, commandeering its communication, or air system to shut down, etc. “When the plane is air-side, you can insert a set of commands and codes that may initiate, on signal, a set of processes,” the former scientific adviser to the British Home Office, Sally Leivesley. He went on to describe how someone familiar with sophisticated systems engineering, could hack into the plane’s controls by sending a radio signal from a small device.

In the aftermath of Malaysia Airlines Flight MH370 disappearance, aviation experts have been considering the possibility of hacking into an airplane and gaining complete control of on-board systems, “including plane navigation and cockpit systems.”

Today’s airplanes are very sophisticated systems. They are comparable to a complex network in which each system runs its software component that could be compromised exactly like the information exchanged by the parts.

According to Pierluigi Paganini, the Editor-in-Chief at Cyber Defense magazine, “Security is fundamental for the aviation industry. Considering the availability of numerous tools on the market that could be exploited in a hypothetical attack against a plane, cyber security is becoming even more crucial. It’s time to adopt for civil uses the same technologies designed for a military environment