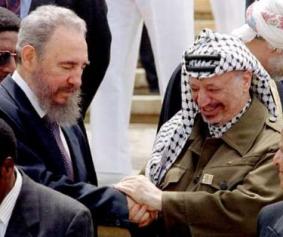 The recent launch of two colognes, “Ernesto” and “Hugo” (named after Ernesto “Che” Guevara and Hugo Chavez), may bring much needed foreign currency to Havana, while helping to remind the world of the Castro regime’s role in the making of the “Terrorist Internationale.” But no amount of cologne would be able to mask the stench of Cuba’s involvement in anti-American, anti-Israel, pro-Palestinian, anti-Semitic propaganda, and support of global terrorism.

During and after the Gaza War, Cuba lost no time in reiterating its long-standing support for armed aggression by the Palestinians against Israel.  Most outrageous was the speech given at the UN by the Cuban representative on September 5, which should be watched by our readers.

This was preceded by Fidel Castro’s lead in signing an August 10 manifesto from international left-wing “dignitaries” supporting Palestine, which demanded that Israel withdraw from “Gaza, the West Bank, and East Jerusalem.”

Castro also slammed what he called “Gaza genocide” in the operation, terming Israel “a nuclear power that is at once sophisticated and irresponsible.”

Israel is frequently reviled by the Latin American left with Cuba in the lead. During the Gaza War with Hamas, Brazil, Chile, Ecuador, Peru and El Salvador recalled their ambassadors to Israel for consultations, and Bolivia placed Israel on a list of “terrorist states”. On September 2014, Cuba sent six tons of drugs and medical supplies to Hamas in Gaza, and said it was willing to receive Palestinians injured during the fighting.

Pro-Palestinian and anti-Israeli demonstrations have been commonplace in Cuba. For example, in January 2014 a “political and cultural event” organized by the embassy of Palestine and the Arab Union of Cuba commemorating the launch of Palestinian armed struggle against Israel in 1965, founded by Yasser Arafat through the establishment of Fatah.  In short, Cuba has long been a supporter of armed struggle against Israel, treating the Palestinian cause as anti-colonial like communist Castro’s own.

Cuba’s support of Palestinian terrorism and efforts to delegitimize the Jewish state through virulent anti-Semitic propaganda goes back to the 1960s. Palestinian terrorists were identified in Havana as early as 1966, when Castro introduced the PLO at the Tri-Continental Conference in that year, and voted for the resolution passed by the conference to break off all treaties with Israel, for the total economic and cultural ostracism of Israel, and expulsion of Israel from all international organizations.

After the Six-Day War (1967), Cuba condemned Israel for the first time at the United Nations. Cuba’s permanent ambassador Ricardo Alarcon called the war an “armed aggression against the Arab peoples. . . by a most treacherous. . . surprise attack in the Nazi manner.”

At the 1973 Fourth Conference of Non-Aligned Nations in Algiers, Castro announced that Arab arguments had convinced him to sever relations with Israel.  In 1975, Cuba was one of only three non-Arab governments to sponsor the resolution declaring “Zionism is Racism” that was adopted by the U.N, General Assembly. The Cuban position was expressed by the Granma Weekly Review, Cuba’s English language weekly distributed abroad, which said the resolution “left no doubt about the identical imperialist origins and racist structure of the Israeli Zionist regime that is occupying Palestine and the one that is exploiting the black masses and South Africa.”

In 1976, Cuba’s reaction to Israel’s rescue of hijacked hostages at Entebbe Airport was to call it a criminal violation of Uganda’s sovereignty consistent with Israel’s racist policies. In May 1977, Cuba was the only non-Arab country in the UN Economic and Social Council to demand that the resolution be included on the agenda of a UN-sponsored world conference on racism.

In the 1970s DGI (Dirección General de Inteligencia) agents were dispatched to PLO camps in Lebanon to train and assist Palestinian terrorists. In 1978, The Economist published two articles in its “Foreign Report” which detailed the Cuban presence in Syria as beginning just after the 1973 Arab-Israeli war. Cuban tank crews fought alongside the Syrians, according to the “Foreign Report,”and suffered 180 dead and 250 wounded. Israeli Defense Minister at time, Moshe Dayan, said in a U.S. television interview on March 31, 1974, that 3,000 Cuban troops were deployed in Syria as part of the Soviet military build-up (Facts on File Yearbook – 1974, Weekly World News Digest, Henry H. Schulte, Jr., ed. New York, April 6, 1974, page 257).

Fidel Castro confirmed it in a speech at the closing session of the First Congress of the Partido Socialista Popular (PSP—as Cuba’s Communist Party was known then) on December 22, 1975, when he said, “… it is no secret to anyone that at any given moment of danger and threat to the Republic of Syria, our men were in Syria.” (Granma Weekly Review, January 11, 1976, page 5.)

In mid-1976, according to The Economist “Foreign Report,” the Israelis spotted a small group of Cuban officers assigned to prepare the ground in southern Lebanon in advance of a larger force.

And again, in 1978, Castro told the Italian weekly Epoca that Cuba had sent equipment, doctors and soldiers to aid Syria in its last conflict with Israel. (Granma Weekly Review, January 11, 1976, page 5.) From April 19 to May 9, 1978, newspapers including The Times (London), the Al Anba’a (Kuwait), and the Rheinischer Merkur (West Germany) reported that Cuban advisers were at PLO bases in Southern Lebanon following a meeting between PLO leader George Habash and Fidel Castro.”

In addition to the training and direct military support, Castro helped introduce the PLO into Angola. The PLO has operated for many years in Africa and in Central America, where it has been able to recruit and train guerrillas and find a market for arms. Castro’s cooperation added impetus to the PLO campaign to promote anti-Israeli postures by many governments.

In late April 1979, an agreement was reached for the PFLP to have several hundreds of its terrorists trained in Cuba. Cuban training manuals, marked “muy secreto” (“very secret”) detailing how to conduct military operations, including blowing up high-power electric transformers and railway stations, were found by the Israelis in Southern Lebanon. These were found during Operation Peace for Gallilee in 1982, further confirming the Cuban involvement with Palestinian terrorism against Israel.”

In October 1979, Castro accused Israel of practicing genocide against the Palestinian people similar to the “genocide that the Nazis once visited on the Jews.” (Granma Weekly Review, October 21, 1979, page 2)

The vile treatment of Israel is a constant element in Castro’s controlled press. Cuban political cartoons often portrayed former Israeli Prime Minister Menachem Begin as a dog, wearing a collar with a swastika. In some cases the Star of David is shown surrounding that Nazi symbol.”

More recently, the Cuban representative to the UN read into the record Fidel Castro’s anti-semitic, anti-Israeli rhetoric. Frank Calzon, Executive Director of the Center for a Free Cuba, wrote about “Havana’s Anti-Israeli Policies and an American Hostage in Havana,” bringing us up to date on Castro’s anti-semitic and anti-Israeli policies and the continuing saga of the USAID contractor, Jewish-American Alan Gross, who was detained by the Cubans more than four years ago:

“Cuba’s hostility to the United States and the West has always extended to the State of Israel.  For decades, invective against Israel and Zionism has been spewed from Granma and other official Cuban media.  Hatred of the Jewish State has not stopped there.  Castro’s Cuba has always played a singularly negative and destructive role in the Middle East.  Cuban support for the most radical regimes and terrorist groups fighting against Israel included training violent guerillas in Cuba itself and providing all sorts of support and assistance.

“Significantly, Cuba has also played a central and leading role at the United Nations in organizing a poisonous apparatus of propaganda and delegitimization against Israel.

“Please listen to the words of the Cuban delegate to the UN at the August 6th, 2014 Special Session of the General Assembly held to discuss the situation in Gaza.  Her extreme, one-sided and distorted condemnation of Israel even includes the words of Fidel Castro who, despite his “retirement”, manages to hurl outrageous and offensive invective against Israel in an editorial in the pages of Granma (where he also accuses Israel of ‘a new repugnant form of fascism’): ‘Why does (Israel)…believe that the world will be insentitive to the macrgre genocide which today is being pertetrated against the Palestimian people?’

“Alan Gross is no spy. The Castro brothers want to use him to blackmail the Administration to release Cuban spies in American prisons. For years the Administration has pleaded with Havana to let him come home to no avail. The Cuban spies were found guilty of conspiracy to commit the murder of three Americans and one Florida resident. Another spy who had been involved in the planning of the murders fled to Cuba shortly before Cuban warplanes’ missiles destroyed two single engine planes in international airspace killing the four men.insensitive to the macabre genocide which today is being perpetrated against the Palestinian people?’

“In 55 years of revolutionary government, Havana severed diplomatic ties with only one country: Israel, in 1973. There were no issues between the two governments at the time, and Fidel Castro announced the break in relations while attending a conference in North Africa in order to ingratiate himself with radical Arab leaders.

“In 1959 when Fidel Castro came to power, the vibrant  Jewish community numbered about 12,000.  They, like other Cubans had all of their properties, and businesses, no matter how small confiscated. Before being permitted to leave Cuba they had to turn their homes, electric appliances, furniture and jewelry over to the state. Today, there are six hundred Jews left in Cuba.

“After failing to obtain the release of Alan Gross, the USAID subcontractor unjustly serving a long prison sentence in Havana, Bill Richardson, a former U.S. ambassador to the United Nations and former governor of New Mexico said that Gross was a hostage.  Gross is a Jew serving a fifteen year sentence for giving a laptop and a satellite telephone to a Jewish group in Cuba. Many others have visited Cuba and giving away laptops and telephones to Cubans, and although some have been expelled, Gross is the only who has received such draconian punishment.  When a Cuban spy serving time in the United States asked for permission to visit his ailing mother in Cuba ,the United States permitted him to do so.  Gross’s mother was very ill, but Havana would not permit him to come to America to visit her.  She died without seeing her son.

“The President’s diplomatic efforts have failed.  But he should not accept the Castros’ blackmail. The United States does not have to go to war, but Havana has paid no price for holding Gross.  Washington has many options. President Obama should look into measures that would put a real price on the Castros’ for holding an American. Just like in the Middle East Obama needs a new strategy to deal with Cuba 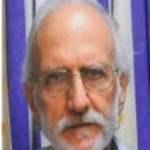 “Two prisoners wanted to see their ailing mothers. Cuban spy Rene Gonzalez, convicted of infiltrating American military bases, asked the U.S. government to permit him to visit his sick mother in Cuba. The United States allowed him to do so. Alan Gross, a USAID development subcontractor, is serving a 15 year sentence in Cuba for giving a laptop and a satellite telephone to a small Cuban Jewish group on the island. He asked the Cuban government to let him visit his very ill mother.  General Raul Castro denied his request, and Gross’s mother died without seeing him. Other foreigners, including Americans, have given laptops, flash drives, and telephones to Cubans, but none have gone to prison. But there are some in Havana that believe the American Jewish community could pressure Obama to release Cuban spies who were charged with conspiracy to kill U.S. nationals, destruction of aircraft, and murder. ‘Four United States nationals, including three United States citizens” were killed by Cuban war planes in international airspace in 1996.“