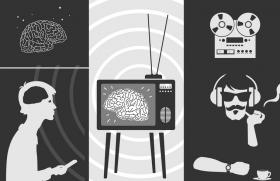 The Russians have several advantages in the information warfare game.

The mind of society is the battlefield in the current global struggle for geopolitical domination. The uses of soft power dominate in this battle and information warfare is the name of the game—not “cyber war” in all the ways it has been described but the influence and ultimately control of individual minds that, like cells in a body, make up the Mind of Society. Then control is used as leverage to achieve objectives that are often hidden.

The recent illumination of Russian operations in this area has received a great deal of publicity. Russian operations of this kind are by no means new or unique, but the scale is unprecedented. This is thanks to distributed means of communication, which in turn created distributed digital islands of simulated life as a habitat on which more and more people (some of the time) and some of the people, all of the time, live their lives. The fragmented efforts of the United States and her allies to defend our mind-space and respond with equally effective operations have been less than adequate.

Effective countermeasures require unified, coordinated strategies recognized to have a high priority so that they will, in fact, be executed. They require clout, funding, and leadership to succeed. Once executed, they need to be evaluated to determine their efficacy. Offensive strategies must attack enemies as they attack us, by gaining access to the insides of their hives and securing the queen, not easy to do when the control of the information space in authoritarian and dictatorial regimes closes many of the gaps that in our more open society leave us unprotected.

The Russians have several advantages.

(1) Russian organized crime is protected by a global criminal network and the state security apparatus. The United States often operates from a condition of implicit detente with organized crime but not with obvious cooperation, which is a force multiplier. At the same time, cooperation enables malicious state actors to feign plausible deniability—as if, for example, Russian or Chinese hackers operate independently of state approval. The kind of alliance forged by the United States with the Mafia during World War II is needed to level this particular playing field, but for that to be acceptable, the dire nature of the threat must be as apparent as the threat from the Axis during World War II. Then, winning does become the only thing.

(2) The ancient Romans knew that a primary means of domination and control was a network of roads. Their roads were physical, however. The roads in question today are digital. Access to every level of a democratic society is available, while access to closed societies and censored networks are curtailed. “Back doors” and software and hardware exploits have provided multiple access points for critical infrastructure, sufficient to create a form of mutually assured destruction, but that is not the same as access to propaganda networks masquerading as journalism in enemy countries, nor to their effective use to deceive and distort over time.

Russians have built those roads.

(3) The psychological effects of the erosion of trust and confidence in our institutions, in journalism, in a shared consensus about what is or is not factually true, cannot be denied, minimized or rationalized away. The sophisticated testing of effective and lasting memes, for example, the birther movement, can then collect uncritical citizens like real birds in digital cages and move the cages into desired positions. That has had a profound effect on morale. The mind of our society doubts itself, which is one major objective of soft power, as doubt and mistrust weaken the bonds that hold together a free society.

(4) Legions of soft warriors are deployed in great numbers with intentionality and vigor. The Russian disinformation campaign in the Baltic states, for example, employed hundreds of individual bloggers, but all fed into the persona of a single person. The same was done here during the recent election.

(5) The brain is designed to believe what it thinks it sees. Evolution favors those who act on what they think is real and dangerous and then reflect later, while those who pause at the moment are doomed.  Designer scenarios, conspiracy theories, and malicious memes pass with the help of repetition through the filters of even the best-educated critical thinkers. They seem to come from multiple sources, reinforcing the deception.

NATO forces have dedicated a cadre to monitor the major themes of Russian propaganda, for example, but it was discovered that even though they knew they were reading and analyzing propaganda for the purpose of understanding it, they came to believe assertions they encountered again and again—despite knowing they were lies. The well-educated might believe they would not do this, which only makes them more vulnerable and easier to dupe. Hubris is the opiate of the overly educated.

Here are just a few possibilities for responding:

(1) During the cultural cold wars of the ’50s and ’60s, the CIA was full of cowboys free to execute some pretty wild strategies, and the decision was made to covertly create global organizations intended (ironically) to celebrate the virtues of a free, open society. That paradox persists and will persist in the national security state we have become. Once we acknowledge that fact, we can apply appropriate limitations to covert warfare waged that way and do it with finesse. In that prior time, the CIA covertly published more than 1,000 books, made films, sponsored periodicals and formed alliances with major news outlets of the day as well as several hundred journalists. The Communist threat justified covert action on that scale. We can apply those lessons in appropriate ways to structures available for manipulation inside enemy lines, being wary of blowback in a global village. Fabricated environments must be grafted seamlessly onto the cognitive artifacts already in the heads of enemy populations as they have been here.

(2) A wide range of synchronized measures must be directed at the systemic weaknesses of authoritarian states. One characteristic of warfare is the exaggeration of the power of an enemy. But their weaknesses are many, and the opportunities for exploiting them are many as well. There are numerous opportunities other than the executive branch for sourcing those strategies.

(3) A cardinal objective of network warfare is to degrade the reliability, trustworthiness, and cohesion of the cells in the network. Selective “leaks” from highly placed officials, designed to point to a targeted individual, will diminish trust in a loyal person and conversely can magnify trust in a weak or disloyal one. Big links can be made small, and small links can be made to look big. This strategy undermines the credibility of the entire network. Suspecting a mole can be as dangerous as having a mole.

(4) The explosion of alt.right structures is a proof of concept of how easy it is to gather uncritical thinkers and bind them to one another with distortions and lies that meld seamlessly with their core beliefs. One of those core beliefs is the disintegration of the American dream as a motivating force. The most patriotic thing this country can do is enable a majority to believe in America in a genuinely hopeful and realistic way based on facts and opportunities rather than false promises that only make people more cynical.

Last but not least, here’s a noble hope: a massive effort at education that emphasizes critical thinking and how to distinguish truth from lies, document facts, do good research and recognize bad research. That multi-generational project perhaps more than any other can create a populace that is mentally well-armed and suitable recruits for this very real war.

Americans have demonstrated in the past that, once awakened to the seriousness of a real threat, they will sacrifice a great deal to meet and defeat it. With effective leadership, that can happen again.

* Richard Thieme (www.thiemeworks.com) is a Minneapolis-based author and professional speaker. He has published four books in the past seven years and has spoken for corporations, including Medtronic, Microsoft, GE, Johnson Controls and Allstate Insurance, and addressed security-related and IT issues for the National Security Agency, the Secret Service, the Department of the Treasury, the FBI, Los Alamos National Lab and the Pentagon. He spoke at DEF CON this summer for the 22nd year.

** The author permitted the publication of this article, which was first published under the title: Countermeasures to a Real Threat: Thoughts in a Dire Time, in AFCEA’s SIGNAL on July 27, 2017.