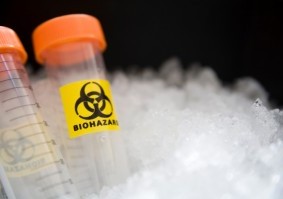 The Obama administration held a meeting today in Washington with the representatives of more than two dozen countries on how to confront  “a perfect storm of converging threats from infectious disease epidemics.”

For once, the current administration seems ready to consider ways to prevent, detect and respond to infectious diseases where they originate:

“The new initiative will aim to bolster security at infectious disease laboratories, strengthen immunization programs and set up emergency response centers that can react to outbreaks within 120 minutes.”

Recent outbreaks of long dormant as well as new drug-resistant disease have become far more than a local or regional phenomenon.  The SARS pandemic of 2003 is a good example: it began in China, killed nearly 800 people in more than 30 countries, at the cost of $30 billion just over a few months. The speed in which the SARS, which spread from poultry to humans who then further spread the disease made it difficult to develop the vaccine needed to stop it.

Laura Holgate, senior NSC director for WMD, terrorism and threat reduction, said, “Not only is there the potential for loss of life and serious economic consequences, but ultimately, there is also instability from a security perspective.” Thus, the administration announced that “the Defense Department is likely to help improve the physical security of laboratories to prevent specimens of potentially lethal pathogens from being stolen or inadvertently released.”

Whatever the motivation for this initiative, the Centers for Disease Control and Prevention (CDC) and the Defense Department will be given some $40 million in 2014 to work with 10 countries, including Uganda and Vietnam, where the CDC has completed pilots to improve diagnostic tests and transport of infectious samples.  The plan is to expand the program to 30 countries over the next five years.

“We judge that some elements of Syria¹s biological warfare program might have advanced beyond the research and development stage and might be capable of limited agent production, based on the duration of its longstanding program.”

The danger of these weapons falling into any of the terrorists groups operating in Syria today would have devastating consequences.

There is no question that the threat of biological agents as potential weapons of mass destruction is on a steep rise. The current counter-biological disaster program, if that’s what we can name what was announced today, seems a puny response when measured against the potential loss of life and damage. Forty million hardly seems significant, but at least it’s something.

It should be mentioned that even in relatively “safe” but still unsafe places like the United States, there are already endemic infections the effect of which could be more greatly amplified by terrorists with the right scientific instruction and financial assistance.  One example would be, of all things, rabbit fever—tularemia, sometimes referred to as “the hiker’s nightmare.”

It is already endemic in the U.S., and some of its forms—for example, pneumonic tularemia, are particularly deadly. Medicaldaily.com reports on new research on the disease.  It is no accident that the report includes mention of the fact that tularemia was one of the first biological weapons:

“While tularemia is a household threat among hikers, the pathogen is perhaps better known as one of the first examples of biological warfare. Ancient Middle Eastern documents dating back over 3,000 years describe how the Hittites, an Anatolian people whose empire covered much of modern-day Turkey and Syria, would release hordes of ‘cursed’ rams into the battle field to weaken the enemy.  Without antibiotics, tularemia kills about 15 percent of the people it infects, New Scientist explains.”

The definition of warfare is changing, particularly in an era in which the norm is asymmetrical conflict.  Attacks on local and regional life and health, as well as kinetic terrorist and cyber attacks, may become the general order of the day soon. Pathogens have been traditionally regarded as difficult to deploy as weapons, but technology—and a rising appetite for martyrdom in the Islamist cause in particular—will likely erase that difficulty sooner rather than later.