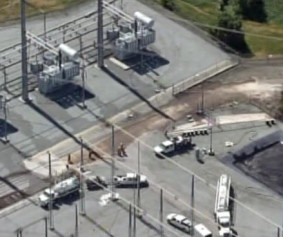 Recent press accounts illustrate the mainstream media’s growing awareness of threats to the electric power grid and the need to counter them. These threats extend from physical attacks, to cyber attacks, to natural and manmade electromagnetic pulse events that could take down the grid for an indefinite period of time, during which several hundred Americans could perish. We must connect the dots and deploy needed countermeasures!

On February 1, 2014, a Los Angeles Times article described  the threat posed by solar storms that will one day occur…Lloyds of London reported on a 2012 near miss that they say, had it hit, could have left 20-40 million Americans without electricity for a year or two; and 2) On February 4, 2014, the Wall Street Journal front page article on a sniper attack in the early morning hours on April 16, 2013, which shut down a power plant near Jan Jose, California for 27 days.

Both were old news—what is important is that the mainstream media is apparently beginning to pay attention to a very important issue: the vulnerability of our electric power grid to a number of threats.

Since we have a habit of ignoring problems until after a major disaster, the key question is: “Will needed remedial actions be taken to deal effectively with these vulnerabilities in time to avert an existential disaster?”

Whoa!  How do these events point to an existential threat?  And, if so, why are we not preparing for it? And how do we assure that this issue is addressed with the urgency it deserves.

Asleep to Physical Threats to the Grid?

The day after the Wall Street Journal article on the San Jose attack, follow-up articles repeated and extended the Journal’s important report in the Los Angeles Times, the New York Times and the Washington Post.  They gave additional information about the Silicon Valley sniper attack that had gone largely unreported for 10 months. And news reports went viral.

Last Sunday, several congressional leaders addressed repeated questions on this event—uniformly noting the apparent planned and executed nature of the attack, supporting the views of a former Chairman of the Federal Energy Regulatory Commission (FERC) that it was a terrorist attack, possibly a trial balloon for more extensive future attacks on the Grid.

One might wonder why Jon B. Wellinghoff, who was the FERC Chairman at the time of the attack, took so long to speak out. Actually he has spoken out, as evidenced by quotes attributed to him last December in a Foreign Policy article. It’s just that few have been listening and acting.

That Foreign Policy article also noted that Rep. Henry Waxman (D-CA), the ranking member of the House Energy and Commerce Committee, stated at a hearing on regulatory issues: “It is clear that the electric grid is not adequately protected from physical or cyber attacks.” He called the shooting at the San Jose facility “an unprecedented and sophisticated attack on an electric grid substation with military-style weapons. Communications were disrupted. The attack inflicted substantial damage. It took weeks to replace the damaged parts. Under slightly different conditions, there could have been serious power outages or worse.”

Still the story remained out sight, out of mind. Even the Chairman of the House Energy and Commerce Committee, Rep. Fred Upton (R-MI), has done nothing to help move key legislation bottled-up in his committee for several years.

This sophisticated attack shut down for almost a month the Metcalf substation in California’s Silicon Valley and came uncomfortably close to a broader shutdown that could have resulted in a massive blackout in California and elsewhere in the West.

Ten months later, the Senators called it “a wake-up call to the risk of physical attacks on the grid.” With all due respect, where have they been?  It is certainly about time that someone noticed this10-month-old “wake up call.”

So far, so good. However, I urge you not to rest easy that anyone with authority to act is really paying attention. This letter itself suggests an ignorance of the dysfunctional congressionally created FERC-NERC arrangement and its long record of not addressing the critical issue of the viability of the Grid in the face not only of physical attacks but also even more consequential threats as discussed below.

We look forward to seeing evidence that the FERC-NERC response, due by March 3rd, amounts to anything more that another stalling tactic like those that have for years delayed any serious action to deal with this urgent problem.

Congress is culpable for underwriting this situation—and, so far, is not doing anything to rectify it.

The letter from the four Democrat senators is perhaps a step in the right direction, but in my opinion it is off the mark in anticipating a constructive response from the FERC-NERC arrangement Congress wrote into law—and which needs to be changed, as proposed by the Shield Act, which has been stalled in the House Energy and Commerce Committee for the past three years, in spite of strong bipartisan support.

But, I’m getting ahead of my story, since the Shield Act was prompted by the far more dangerous threat from an electromagnetic pulse (EMP).

I also encourage you to read Dr. Peter Pry’s Washington Times article challenging the alleged FBI view that there was no evidence that the San Jose attack was a terrorist attack, at least as reported by the Wall Street Journal and others. This position seems inconsistent with, among other things, a Navy Seal assessment at the time that found the attack to be highly professional, like a military, operation. The Seals’ perspective was also reflected by several Congressmen on last Sunday’s talk shows as well.

Media Awareness of Other Threats to the Grid.

Although a simultaneous, coordinated terrorist physical attack on a number of power stations could potentially take down the grid over a significant area—and should be protected against, there are even more credible ways terrorists might take down a significant portion of the grid.

For example, a cyber attack—like the one explored in the National Geographic cable TV presentation on October 27, 2013—could take down a major portion of the grid…. The exercise demonstrated a plausible major societal breakdown in only 10 days—when the presentation was arbitrarily cut short to provide a happy ending.

The New York Times that day carried a super 10-minute video describing past events; and among other things quoted then Defense Secretary Leon Panetta’s warning of a Cyber Pearl Harbor.

Then, a NERC-led nationwide Grid Ex II exercise was conducted the following week. While the results of this exercise are still not published, we immediately afterward discussed three early reports that provided enough of a snapshot of the exercise’s content to understand its limited nature—and why no one should take comfort in whatever may be eventually concluded.  This result so far fits with NERC’s past stalling tactics that have delayed for years any apparent effective response at the Federal level to this now well-known threat.

Beyond the cyber threat is the threat of a ballistic missile carrying a nuclear weapon that is detonated a hundred miles or so over the U.S. to produce an EMP that covers the entire United States—shutting down the entire current electric power grid immediately and indefinitely. This is a well-known threat against which we hardened our strategic systems to survive and retaliate during the Cold War, but which has been completely ignored in designing, deploying and maintaining our critical civil infrastructure—particularly the electric power grid upon which essentially everything else depends.

During the Cold War, we sought to deter such an attack and judged we did not need to harden our critical civil infrastructure against it. But deterrence through threats of retaliation probably will not work against today’s threats from Jihadi terrorists or the Iranian Mullahs who seek hasten the return of the Mahdi in destroying the “Little Satan” Israel and the “Great Satan” America.

There’s recent news on that front as well.

Iranian Threats from the Sea and the South.

Consider two recent reports: 1) A February 8, 2014 Associated Press report that the commander of Iran’s Northern Navy Fleet, Admiral Afshin Rezayee Haddad, said Iranian warships already in the Atlantic Ocean will travel close to U.S. maritime borders for the first time, and 2) Monday’s Jerusalem Post which elaborated this account with quotes from the commander of Iran’s navy who threatened to sink American naval vessels and cited progressive naval capabilities after sending Iran’s fleet toward US shores.

Whatever the merits of this challenge from a military point-of-view, Iran’s “in your face” posture demonstrates the views of the ruling Mullahs and particularly Iran’s Supreme Leader Ayatollah Ali Khamenei—and their disdain for U.S. diplomatic initiatives that are little more than appeasement.

As previously noted, Iran’s shrinking “breakout time” to complete processing enough nuclear material for a bomb is now less than two months—derived from International Atomic Energy Agency (IAEA) reports and related information. The negotiations continue, fueled by previous U.S. concessions that reduced the previous sanctions that brought the Iranians to the negotiating table. As Israeli Prime Minister Benjamin Netanyahu said at the time, this was a very bad deal—now clearly exposed to have accomplished nothing.

But Michael accurately reflects my greater concern about an Iranian (or a surrogate terrorist) commercial vessel that could carry a nuclear-armed ballistic missile cloaked among numerous vessels off our coasts, erect it and launch it to detonate its payload over the U.S. with very little warning.  Today we might be able to intercept such a missile launched from off our East Coast by employing the 4-6 Aegis BMD ships that may be there, but we have no defense against ballistic missiles launched from vessels in the Gulf of Mexico—or from other places South. We need to rectify this shortfall ASAP.

We also need to protect against an Iranian satellite that could carry a nuclear weapon over the South Pole to attack us from the South. Iran and North Korea (Iran’s partner which already has nukes) have repeatedly launched satellites into such orbits that can easily be steered over the U.S. Today, this “back door” is wide open because our defenses are deployed against missiles approaching the U.S. from the North.

And we need to harden the electric grid in any case to deal with a massive solar emission that could create a Carrington event, such as happened 155 years ago—and we are due for an encore.

We know how to do this. No additional development is needed to get started—though we might be able to improve on the hardening technology developed and applied to harden our nuclear forces and their command and control systems for decades.

*These are excerpts from Amb. Cooper’s blog.