Comparative Thuggery Challenging Interests of US And Its Allies* 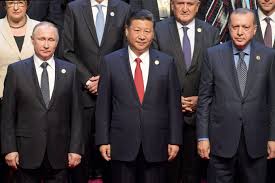 Three recent events, each part of a long series of similar events, has led me to establish the Bailey Award for Comparative International Thuggery (BACT).

We all know of failed states, such as Syria, Libya, and Yemen, but we should now establish another category of states: thug states, beginning with two huge thugs – China and Russia, equipped with thousands of nuclear weapons, and one medium-sized thug, Turkey, equipped with a president whose mouth is that country’s equivalent of weapons of mass destruction.

For years, Russia, under Putin’s autocratic rule, has engaged in widespread interference in the internal affairs of other countries, in addition to its use of military display in the Baltic, Black and Mediterranean seas and in the airspace of its neighbors, as well as direct and indirect warfare victimizing first Georgia and then Ukraine.  In northern Syria, Russian military contractors have attacked US forces.

China, under President Xi Jinping, has engaged in direct military threats to many of its neighbors, including rampaging around the East and South China Seas, confronting Indian troops on the Himalayan borders and establishing naval bases in Gwadar (Pakistan) and Djibouti.

Turkish thuggery has included military incursions into Iraq and Syria as well as constant threats against a long list of European and Middle Eastern countries and the US. Turkish thuggery has become so bold that Saudi Crown Prince Mohammad bin Salman included Turkey in his “triangle of evil,” along with Iran and terrorist groups.

The list could be lengthened, of course, to include Iran and North Korea, but those two countries are widely recognized as thugs by the international community (even the United Nations, notorious for mollycoddling thuggish regimes). Russia, China, and Turkey, however, are treated as respectable countries and even, in the case of Turkey, an ally.

Which is precisely the point. The failure on the part of the so-called Western World to confront thuggish countries and punish their behavior effectively bodes ill for the future. Aside from a good deal of tut-tutting and a minimum of indirect sanctions in the case of Russia (as well as the stationing of some North Atlantic Treaty Organization units in bordering countries), there has been little in the way of preventive or punitive reaction on the part of the West. Indeed, we have seen a good deal of ignoring and even excusing their thuggish behavior.

Turkey should have been at least suspended, if not expelled, from NATO. It is no longer an ally in any meaningful sense but has openly declared itself an enemy.

China should be called to account for its actions in Australia and the East and South China Seas. At least in the case of Australia, Chinese interference has become so egregious that a political backlash is developing which many hope will result in significant countermeasures.

Finally, Russia simply cannot be allowed to continue its thuggish behavior (now including Putin’s display of anti-Semitism) without being forced to back down or pay a heavy price, targeting its oil and gas exports. Similar measures were successful in the case of Iran until they were thrown away in then-US president Barack Obama’s infamous “deal” with the thuggatollahs.

The “West” coddled the Nazi thugs from 1936 when Germany reoccupied the Rhineland with no opposition, through British prime minister Neville Chamberlain’s and French prime minister Édouard Daladier’s “Obama moment” in Munich, the dismemberment of Czechoslovakia and the occupation of Austria, until 1939, when it culminated in one of the most horrific wars and genocides in the history of the world.

Stay tuned for the announcement of the first annual Bailey Award.  The judgment will not be an easy one, but I am sure the jury will make the right choice.