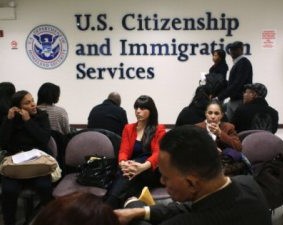 Almost three decades ago, I made a “discovery:” virtually all the problems I had been chasing for years, as a reporter in Asia, existed in Mexico. Because of the only land border between what was then called the first and the third worlds, one day it might constitute a security threat for the U.S.
(Mexico: Chaos on our doorstep, Madison Books, 1989, “The Invisible Invasion,” documentary, Coalition for Freedom, some PBS stations, 1990).

Much has changed in both Mexico and the U.S., of course. But the current debate on immigration turns around the same old issues. Illegal immigration, delineated in my research then, remains as critical for American policymakers.

It all begins and ends with numbers, of course.

But nobody knows how many illegal immigrants are in the U.S.–although the conventional wisdom holds that the vast majority is from Mexico. Even that may not be true, as “overstaying” visas has long been virtually unpoliced. Among other immigrants for example the Irish, who once again are fleeing a deteriorating economy, are among the worst offenders.

Note that the mainstream media–never having done its homework on this, as increasingly on other issues–has recently reduced the estimate of 12 million to 11 million, apparently at official Washington’s suggestion. A million here and a million there, and pretty soon you have a dysfunctional immigration system.

If millions of illegals in the country are not being apprehended, how do U.S. authorities know how many there are? At a seminar back in those earlier days, I had an answer from a CIA participant. (The spooks used to kick in on the Department of Commerce’s Census Bureau budget and I assume still do.) His response was that the calculation was extrapolated from the legal entries from those same countries. My counter was that I doubted if that the bright, young college co-ed par time census-taker, clipboard in hand, could possibly know who were Dominican illegals in New York City’s Spanish Harlem and who were, indeed, Puerto Ricans. They, of course, are American citizens by birth (without national voting rights on their island). But until the mid-1930s of the last century, Puerto Rico had no government birth certificates and proof of citizenship was based on other documentation, e.g., church christening certificates. I was not accusing the good fathers of being in on a racket but …

Have things changed? Recently, the Puerto Rican government invalidated all birth certificates issued before 2010 and demanded new applications for proof of citizenship. That was after the State Department’s Passport Office reported 40 percent of all identified American fraudulent passports were based on forged PR birth certificates. The recent deterioration of the Island’s economy has increased migration to the continental U.S., with more “Boriqueňos” living there than in the Caribbean.

Florida now rivals New York with some 850,000 declaring themselves Puerto Rican in the 2012 census, voting heavily Democratic, topping the state’s Cuban Hispanic Floridians, traditionally Republican. Hmmm! And Dominican illegals are still believed to be a major element among the “undocumenteds” along with other Islanders and Spanish-speaking Central Americans.

But this numbers farce doesn’t begin or end with estimating illegals inside the country. Border-crossing statistics, I found then and I have no reason to believe things have changed, were often notional. Legal crossings from Mexico represent only a portion of total immigrants. But how to estimate the smuggled who are not apprehended?  Border officials told me off-the-record that official figures were vastly manipulated. (They included a former Mexican-American Border Patrol official, until recently a senior Democratic Congressman, exchanged his former views for “the Washington consensus” once in the nation’s capital.) One anecdotal piece of evidence is that apprehended illegals returned to Mexico, as often as not, attempt to cross the border again immediately, often successfully.

Outgoing Homeland Security Secretary “Big Sis” Janet Napolitano insisted that the border is secure since illegal apprehensions are up and deportation of illegals is greater than ever. But how do we know what is the numerical relationship between apprehensions and illegals crossing the border? And if expulsions are up, could it simply because the number of illegals inside the country is greater than ever before?

In fact, there is a widely held assumption that because of the downturn in the U.S. economy and less opportunity for employment, fewer immigrants are attempting to enter the country. All of this arithmetic is bogus, of course, because again, we simply have lost control of the whole migratory process and do not know what is really going on.

But to quote a possible future presidential candidate on another equally pressing public issue, “What difference does it make?”

It matters, for a number of critical reasons, for economic and political stability.

In a wicked world where, despite the unsubstantiated optimism of the Obama Administration, the U.S. still faces the threat of domestic terrorism–as the recent Boston Massacre demonstrated. Who comes across the borders is critical. Even in my reporting so long ago, when transportation generally was far more difficult and expensive and world migration patterns far smaller, large numbers of non-Mexicans were reported among the apprehensions.

Not long after my book appeared, a major smuggling ring among the Indian Sikh community was unearthed in New Delhi using the Mexican crossing points. Because of increased surveillance of student and other temporary visa applicants in the New Delhi U.S. embassy, more Indians have turned to crossing the border illegally. Between October 2009 and March 2011, official figures from South Asian illegals attempting to cross rose to 2,600 a month, a dramatic increase over the earlier typical 150 to 300 arrests.

Does one have to remind the reader of the bloody Bombay Massacre of 2008 or that India’s huge Muslim population, along with Pakistan and Bangladesh, represent the majority of the world’s Islamic pool from where the terrorists are drawn?

There is at least one new aspect: the U.S.’s domestic search for jobs has intensified as the recovery coughs and sputters from the worst economic downturn since the Great Depression. A part of the continuing U.S. unemployment crisis arises from changes wrought by the digital revolution. Still playing out, it will continue to eliminate low and medium-skilled jobs. Unfortunately, the American educational system, wrecked by too many experiments and greedy unionists, has not imitated the apprentice training of the Germans.

Additional foreign low-skilled and illiterate immigrants are not needed.

In Mexico, expanding manufacturing–some of the escaped “twin plants” may be returning under wage pressure in China–is still in its infancy. Fractured agricultural land tenure left over from 1930s leftwing experiments still does not provide enough jobs. Meanwhile, the U.S. $13 billion annual appetite for illicit drugs has contributed to vast criminal cartels challenging the Mexico government with 60,000 murders over the last six years. These drug rings now reach into the U.S, enhancing the old networks of “coyotes” shepherding illegal immigrants. Those had fed low-skilled workers from the time of the chaotic Mexican Revolution of 1910-20 when the American immigration skimmed the Mexican middle class. Since then, the continuing immigration has been largely non-skilled. For example, I found Rice University in Houston was in its third generation of illegal gardeners from the same Mexican villages. A Mormon farmers’ network I found funneling illegal Mexican fruit and vegetable pickers into the mountain states may still be in business.

Most illegal immigrants have been in the past, as the clichés hold, hardworking, ambitious, and contributors to American prosperity. But, increasingly, by permitting immigrants to become part of an illicit underclass, the U.S. has subjected them to exploitation and helped foster a growing climate of illegality in the increasingly complex world of government entitlements to health and old-age benefits. Again, with the growing digitalization of our economy and society, there is likely to be less opportunity for these immigrants in their competition with native-born unskilled workers.

On another front, the U.S. technological lead is under constant threat, and important to it has been the importation of tens of thousands of accomplished scientists and ambitious students who have stayed on after university. More than ever, “the golden door” to those qualified immigrants’ needs to be held open. The U.S. visa system must also provide for the highly seasonal flow of agricultural contract workers, perhaps as it did during the WWII manpower shortages. And despite its dangerous civil rights implications, Washington needs legislation requiring worker identification for employers to screen out illegals.

It perhaps goes without saying that these issues need immediate attention. Not the kind of “comprehensive” slapdash approach with which the Obama Administration approaches all issues.

Already it is clear it may take years to unscramble the shipwreck of Obamacare. The Senate’s immigration bill was a half-hearted attempt to repeat that disaster. Leaving aside the old Senate ploy of “I -voted-for-it-before-I-voted-against-it”, it was a cynical propaganda stunt. The senators knew that their approach would be rejected out of hand by a Republican majority in the House of Representatives. Nor was their feint at a last minute tough border amendment credible when the bill gives the administration authority to waive its requirements.

To pass a thousand-plus-page bill with less than 24 hours to review its contents was incredibly contemptuous even by current Washington standards.

What is needed is a careful, systematic approach to a host of individual issues of migration–something some House Republican critics have promised. Countering that old political standby about the center holding, can this dedicated fringe succeed?

*A version of this column is scheduled for publication Monday, July 15, 2013, at worldtribune.com