Common Sense and the U.S. Economy 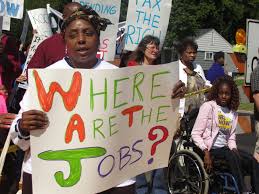 The U.S. economy is sick. And it’s not getting any better despite the inherent vitality and innate resources which do spring to life intermittently from the world’s largest and most important economic enterprise. In fact, it may be growing worse in terms of basic issues.

Vested interests–the Obama Administration, economists living in perennial statistical delirium, and the Administration’s media claque led by government-subsidized National Public Radio/Marketplace–have been grasping at straws. Despite their paeans based on Washington’s manipulated statistics, the reality is quite different.

One stark element stands out: a catastrophic loss of jobs and increasing, not decreasing, unemployment, particularly among semi- and unskilled workers and among recently university leavers. The Administration and its backers perform a statistical hat trick in calculating a declining unemployment percentage against the working population. But what is not emphasized is that the total labor force is rapidly declining, due in large part to disillusioned workers dropping out as they find it more and more difficult to find employment and take advantage of government benefits. (Almost 50 million people are on the government’s give-away food program. A third of a million workers are at any given time receiving unemployment benefits.)

Also, the increase of new jobs often noted in government’s statistics includes an increasing percentage of part-time employees. Again this is due to the general fall in economic activity but also to the restraints on small businesses. New regulations and taxes make it more economic for employers to reduce their total full-time workforce or substituting part-time workers in order to avoid coming under Obamacare. Despite the growth of sophisticated employment in the information technology industry, much of it going to immigrants, there is likely to be a decline in the general level of higher paid jobs.

There is much talk, from both the President and his critics, about the federal government’s role in promoting the economy. Cynically, that often includes the additional government employees that the Obama Administration has been throwing on the taxpayers’ burden with alacrity. (“Over the past four years, another 700,000 workers at the federal, state and local levels of government lost their jobs. These are cops and firefighters,” Obama said. “About half of them are people that work in our schools. Those are real jobs. It doesn’t help a company like Amazon when a teacher, cop or a firefighter loses their job. They don’t have money to place an order. That’s hundreds of thousands of customers who have less money to spend.”  In fact, federal government employment increased by almost 100,000 in May 2013 alone. Huge new hiring is promised for the Internal Revenue Service under Obamacare.)

Truth be told, government cannot–even with the enormous regulatory inroads of recent decades into the private sector’s business–do all that much to produce economic activity. The U.S. economy was built on the principle of private initiative. It still must rely on it, even to the point of the private sector’s taxes paying for an increasingly large dependent sector of the population through social welfare “entitlements.” (That was Mitt Romney’s politically incorrect reference to the 47% figure for unproductive members of the society who would not vote for him because they rely on government handouts.)

What the government can do is remove, in so far as that is possible, obstacles to private initiative incorporated in longstanding law and regulation that may not be longer necessary. Even more importantly, government must instill an atmosphere of stability and confidence. There is also a role (although in recent decades with much more sophisticated markets less necessary) for government financing of huge and long maturing infrastructure.

Government assurance of stability and confidence in an increasingly complex and crisis-ridden atmosphere is all the more critical. The perception of government indecision is an important part of the present problem. In a system where gambling to produce wealth is basic to its success (and failures), government indecision or constant fiddling with laws and regulations is counterproductive since it discourages the investor from making his “bet.”

The Great Recession that we in the U.S are now passing through is a combination of the eternal business cycle (one of those immutable phenomena when after a period of prosperity ambition is overtaken by wrong estimates and carelessness) and a massive technological revolution. The latter is today the vast ramifications of the digital revolution, which the world is only beginning to experience but has already reached into the corners of every life. Its impact probably exceeds anything since the early 19th century and the beginning of the industrial revolution in changing the nature of the economy and, indeed, of life itself.

One of its fortunate and unfortunate aspects is to again have reduced the necessity for physical labor and even sometimes human presence altogether. Tens of thousands of jobs in the vast network of modern U.S. society are being wiped out by the substitution of automated transactions carried on through the digital antics of the computer. Any look around the local scene immediately demonstrates that. One has only to have had the vantage point of years in passing a roadbuilding crew on one of our highways to see how heavy earthmoving machinery often now outnumbers the humans who operate them. In the office, any process which requires sorting, for example, needs less and less professional personal, human guidance. Digitalization has permitted the coupling of thousands of automatic transactions which until recently required human intervention to liaison.

It is this phenomenon, perhaps even more than the general slowdown of economic activity, which accounts for our enormous and growing unemployment. This structural readjustment is taking place in an economy that since the end of the World War II except for brief periods was phenomenal in creating jobs, especially in comparison to the other developed economies in Europe. The problem of retraining from old disappearing jobs to new vocations is exceedingly difficult. The federal government’s two dozen training and retraining programs were never very good. (Nor have we in more than a century been able to imitate the marvelous German apprentice program which has contributed so much to that country’s prosperity.) The government programs have now failed totally given the sheer size and difficulties of fitting experienced workers to new jobs in an economy increasingly bereft of old-fashioned manufacturing–again a combination of the digital revolution and “outsourcing” to cheaper wage economies abroad.

Were this not enough to tax the population in its effort to make monumental changes not only in ways to secure a livelihood but in their new social setting, along comes an Administration headed largely by inexperienced theoreticians and ideologues with promises for “transformation.” But the call for massive change is not aimed at meeting the digital challenge, but rather for social-political goals of increasing economic justice through more equality of results–not necessarily of opportunity. The patient should not have to go under the plastic surgeon’s knife when he is on life support.

Even where technological change has produced enormous possibilities of benefice, the plastic surgeons look in the other direction. A dramatic example is the breakthrough in exploiting shale gas and oil. Not only has it given the U.S. the possibility of independence of foreign oil suppliers–especially those in the Middle East who have become the main source of both political (terrorism) and economic (financial imbalances) instability–it could also introduce whole new energy and transport systems. Subsidies have gone to so-called “green” alternate energy projects, many of which are still short of the technology to make them competitive, others with vast losses occasioned by political crony (but amateur) leadership. Pipelines which might have brought additional distribution to natural gas as a fuel for serving automobile fleets on a vast scale have been blocked or ignored. Reluctantly, the irony is that the Administration has claimed credit for the reduction of toxic gases through the consumption of more natural gas. But the vulnerability of the population has increased by markets forcing the new gas and oil supplies onto the overloaded railroads. (U.S. railroads shipped 9,500 carloads of crude oil in 2008; by 2012, that number had increased to 233,000.)

Nothing in the President’s speechathon on the economy now underway suggests he has more than a glimmer of these fundamental problems. Instead, his attention flirts from short-time political gains for his party, and its left wing at that, and theories about economic restructuring that he links to the origin of the nation and what he sees as the inadequacy of such fundamental laws as the Constitution (badly echoing a half-digested version of the old “progressive” theory).

So, the prospects are dim. Foreign capital–Chinese corrupt practices pushing billions West and the insecurities of the Euro–will continue along with the Federal Reserve’s money printing operations to fuel the stock market. But the more fundamental problems of the economy are with us until new leadership takes Washington’s foot off the brakes.

*A version of this column is scheduled for publication Monday, August 5, 2013, at worldtribune.com