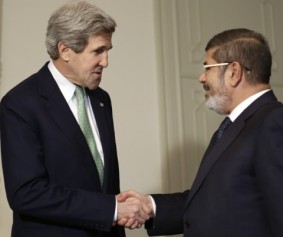 The TSA public review that was released last week reports a16.5% (257) increase in guns discovered in 2013 over the previous year. Checkpoints across the countrydiscovered1,813 firearms in carry-on bags. Of those, 1,477 (81%)were loaded, averaging nearly fivefirearms that could have been fired at a U.S. airport on any given day. Firearms were intercepted in 205 airports. How many guns got by the TSA?

The report details some of the weapons that were discovered and the methods used to try to conceal them. However, there is nothing about the passengers who intentionally packed them. Were they American citizens? White? Hispanics? Blacks? What was their average age? What was their gender? How many had criminal records? What triggered the search? And,were any of these passengers “home-grown” jihadis?

Briefing reporters earlier this month, Deputy Coordinator of Regional Affairs and Programs in the State Department’s Bureau of Counterterrorism, Justin Siberell said that “since the Arab uprising, dozens of terror groups having affiliation with Al-Qaeda have emerged…Al-Qaeda is more decentralized, with like-minded groups drawing inspiration from its ideology. … The U.S. is concerned over the fact that regional conflicts are fuelling these groups.” Another senior Joint Terrorism Task Force (JTTF) official added, “Homegrown terror suspects are difficult to find. … It is the biggest challenge today for intelligence and law enforcement officials.”

If this is U.S. law enforcement’s “biggest challenge,” why did the TSA provide “port courtesy”-a VIP treatment that circumvents mandatory security screening to-Egyptian members of the Muslim Brotherhood at JFK during March andApril of 2012? They were neither diplomats nor members of a government. Only two months later did Mohamed Morsi and Egypt’s Muslim Brotherhood’s Freedom and Justice Party take over the government.

This reported U.S. government treatment of the Muslim Brotherhood in the spring of 2012 continued even after Morsi’s ouster from power and the outlawing of the Brotherhood by Egypt in the summer of 2013.  While the U.S. designates and sanctions terrorist funders who are associates with Muslim Brotherhood linked organizations, the Brotherhood per se is left unscathed and even welcomed by this administration.

On December 18, 2013, a close associate of Youssef Qaradawi, the intellectual leader of the Muslim Brotherhood, was designated as a terrorist by the Treasury Department. Abd al-Rahman bin ‘Umayr al-Nu’aymi (aka Umair Al-Nuaimi) was sanctioned for providing financial support to al-Qaeda, Asbat al-Ansar (the parent organization of Syria’s al Nusra), al-Qaeda in Iraq, and al-Shabaab.

It took until December 10, 2013, for the State Department to designate the al-Nusra Front as a foreign terrorist organization, ostensibly for its connections with al-Qaeda. However, the Brotherhood connection was ignored, despite Qaradawi’s and the International Union of Muslim Scholars (IUMS) praise of al Nusra for having “done well.” Incredibly, on June 2013, Qaradawi’s deputy Sheik Abdullah Bin Bayyah, at the IUMS, participated in a meeting at the White House, which was also attended by National Security Adviser Tom Donilon.

Why this special treatment for the Brothers?  By now, the U.S. government should realize that the MB is anything but “moderate.”

Statements by the Brothers also show the danger they pose. A 1991 document that was made public during the trials of the Holy Land Foundation (2007, 2008) name many American Muslim organizations as unindicted co-conspirators.  It alsoshows Mohammed Akram, who was both a director of the Muslim Brotherhood in North America and a Hamas member, explaining the group’s goals as follows:

“The process of settlement is a ‘Civilization-Jihadist Process’ with all the word means. The Ikhwan must understand that their work in America is a kind of grand Jihad in eliminating and destroying the Western civilization from within and ‘sabotaging’ its miserable house by their hands and the hands of the believers so that it is eliminated and God’s religion is made victorious over all other religions.”

Despite renewed attention in recent years to Muslim-Brotherhood-affiliated groups operating in the U.S., radical Islamic organizations disguised as “mainstream Muslims” are now presenting their Islamist agendas to the government and appear on a regular basis in the media. These groups includethe Council on Islamic Relations (CAIR), the Muslim Students Association (MSA), the North American Islamic Trust (NAIT), the Muslim American Society (MAS), Islamic Society of North America (ISNA), and the Muslim Youth of North America (MYNA).

CAIR’s terror ties have long been confirmed in numerous court cases, the most recent of which is the Holy Land Foundation (HLF) case of 2009, which exposed HLF as a Hamas fundraising front.

Evidence provided at the HLF the HLF trial, also noted the Washington, D.C.-based International Institute of Islamic Thought (IIIT), which since 1981 has served as the MB’s ideological center in the U.S.

Instead of inviting Muslim Brothers to the White House and extending them VIP treatment at airports, it is time to stop the progression of the Brotherhood’s aggressive indoctrination of Americans regarding the radical Islamic agenda, recently dressed up as “Islamic democracy,” a contradiction in terms.