But Will the Senate “Deliberate”? 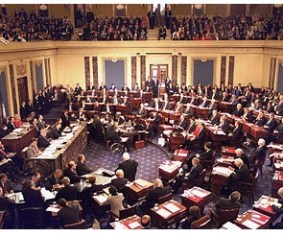 Americans like to believe as a culture they excel at detail. It’s not true. The Japanese, the Germans, and sometimes the French, may well do so. But the American forte is to reduce the complexity of big ideas – whether in politics or industry – and broaden their appeal or their functionality. The Brits invented TV, radar, discovered antibiotics – but Americans made them marketable and a commonplace.

Indeed, so-called popular culture, now a worldwide phenomenon, is a product of the American lifestyle which strives for universality. The ability to achieve a common denominator, sometimes at the risk of higher quality but wider acceptance, has characterized U.S. decision-making through its history and been the genius of the society.

Therefore, the devil remains in the details. And when they are lost sight of, among other things, there is the avalanche of continuing disasters which have befallen the Obama Administration. True, it is inspired by a 19th century ideology of progressivism that reduces all standards to relativism. But it also borrows heavily – what a comment on the history of ideas! – from the failed Communist and socialist theory that fell in on itself in 1990 with the sudden crash of one of the greatest and most cruel pipedreams in the history of governance.

But the self-evident nature of the Fast and Furious guns smuggling scandal, the Benghazi fiasco and martyrdoms, the IRS persecutions and their discrediting of government institutions, the NSA’s perceived overreach and threat of Big Brother, Eric Holder’s star-chamber pursuit of newsmen, the Secret Service’s corruption and mishaps, the Ebola muckup and threat of epidemic – all are in large part the failure to tend to detail.

One of the more inane criticisms, by Republicans as well as their opponents, is that the GOP did not offer large package proposals to solve all problems in the current midterm election campaign. In the first place there are no such remedies. Nothing has so led the Obama Administration into disasters as its so-called comprehensive solutions, whether Obamacare or its Mideast strategy. Their corollary of comprehensive solutions, that compromise is always best, is also belied by history – whether Dred Scott or the 1935 Neutrality Act.

Yes, the Senate Democrats with some Republicans in tow did pass a comprehensive immigration reform package which the House Republicans, rightly, refused to consider. Anyone who has taken the most superficial look at any aspect of the problem, for example the control of the southern border or the problem of overstayed visas, knows its infinite complications and the difficulties of finding solutions to them. Only by tackling individually each one of the many manifestations of immigration and in detail will progress be made. Nor will it be made by accepting an improvable estimate of the millions of illegal aliens in the country. That has significantly recently bounced back and forth from 11 to 12 millions with nothing by way of substantiation. A million here, a million there, and you have an insoluble problem! Common sense tells you U.S. officialdom obviously does not have even a ballpark estimate of the true number, given their wide varieties of entry, their origins, the refusal of local governments often to cooperate with U.S. Enforcement and Immigration Service [ICE].  An ICE which turns hundreds if not thousands of illegal alien criminals lose back on the general population obviously cannot find a “scientific” way to calculate how many “undocumented” it is really tallying.

Therefore, as we roll into an election which will give the Republicans control of the Senate — and not, if as this writer believes, with more than a splinter margin — one can only hope that body will return to its proudest moments. “The world’s greatest deliberative body” needs to deliberate. Senate Majority Leader Harry Reid will go down in history as a leader who did more than any other, perhaps in its history, to limit debate. (If that old Capitol Hill adage that after the Senate dictatorship of Lyndon Johnson, the senators “learned” never to have a strong majority leader bears scrutiny, Reid has proved the point.)

It’s not just that there are almost 370 bills passed on by the House Republicans waiting for some sort of action in the Senate. Most of these were detailed pieces of legislation designed, however disputatious and boring, to create new law or more than likely simply amend existing nonperforming or ill performing legislation on the books. It certainly gives the lie to the accusation of a do-nothing Republican majority in the House.

One of the reasons why one might be optimistic about the new senate is that dozens if not most of these stalled House bills in the new environment will have the support of some Senate Democrats as well as their Republican majorities in the House and Senate. For example, there were probably a couple of dozen Senate Democratic votes for the Obama-blocked Keystone XL Pipeline go-ahead and the energy policies it represents; 11 of the current Senate had the courage to write the President calling on him to change his mind and support it. But Reid did not let it get to the floor.

Reid has invoked the so-called nuclear option on some votes, a simple majority vote rather than the traditional two-thirds, eroding the tiresome, troublesome, inhibiting ability of senators to talk endlessly, but hopefully in their best moments to say something significant and use their powers of persuasion. There may be no turning back now; what’s good for the goose is good for the gander. But it would be a terminal disaster if the new senate does not get back to its historic role of talking it out.

Need one say, too, choosing the new executive coming in 2016 calls for men or women of more decisive and quicker action? Recent events have proven Harry Truman’s old comment that the constitution and historical usage has made the American presidency a very strong executive and he must exercise its powers. In the presidential elections ahead, hopefully a lesson has been learned and the American electorate should restore the Senate to its proper place of dialogue but look among the governors and other executives for the talent to run 1600 Pennsylvania.

* A version of this column will appear on yeoldecrabb,com on Monday, November 3, 2014.