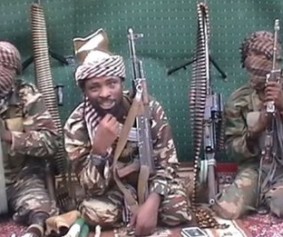 The State Department designated the al-Qaeda-affiliated Nigerian Boko Haram group (aka Jama’atu Ahlis Sunna Lidda’awati wal-Jihad) as terrorist, after two years of Congressional hearings and repeated requests to do so.

The growth of Boko Haram and the spread of al-Qaeda-linked terrorist groups throughout Africa was helped by weapons from Muammar Qaddafi’s stockpile, including Libyan SA-7 and SA-24 shoulder-fired surface-to-air missiles (MANPADs), which, according to the State Department, “have been accounted for.”

The logic behind suspending the designation makes you wonder. Seventeen months ago, the Sate Department listed Boko Haram’s leaders Abubakar Shekau, Abubakar Adam Kambar, and Khalid al-Barnawi as Specially Designated Global Terrorists because they led an al-Qaeda-linked terror group that “threaten[s] the security of US nationals or national security, foreign policy, or economy of the United States.” However, the group itself wasn’t designated until today.

The reason for this absurdity was that “Many Nigeria watchers in Washington, including former Ambassador John Campbell, have backed the US State Department’s approach, arguing that it [Boko Haram] does not pose a threat to the American homeland” at present, and that “Americans could become a Boko Haram target if the US government is perceived as closely aligning with Abuja’s war against the group.” The same watchers, with an eye toward the exacting requirements for terrorist designation, have also pointed out that Boko Haram hasn’t really attacked the Nigerian government although the group has been attacking military installations …

Moreover, Boko Haram’s splinter group, Ansaru, aka Ansar al-Muslimeen in the Land of Black Africans (Bilad al-Sudan) was also designated terrorist by the State Department for focusing “on Nigerian military and Western targets.”  On January 20, 2013, Ansaru ambushed a Nigerian troop convoy bound for Mali to fight al-Qaeda groups there.

Another odd excuse for not designating Boko Haram as terrorist, voiced by human-rights-groups, was that the Nigerian military has been equally as brutal as Boko Haram in suppressing the group and violating the human rights of the Muslim population in northeast Nigeria.

According to this logic, the Muslims in Nigeria are free to violate the human rights of those they perceive as enemies. Since Boko Haram is a jihadist group, all infidels are considered enemies. Does this mean that for these human rights groups, Muslim rights top all others?

In 2012 Boko Haram announced its intentions “to eradicate Christians” from that part of Nigeria it considers Muslim. And Boko Haram’s leaders have threatened the United States specifically many times since the group’s founding in 2009. Yet, the group’s brutal attacks on Nigerian Christians (infidels), including church bombings on holidays and during Sunday services (a preferred modus operandi), didn’t move the State Department, which apparently didn’t wish to be seen as having a special concern for Christians.

It has been known for a while that the new designation was forthcoming, especially after revelation that Boko was probably involved with al-Shabab in the Kenyan mall attacklast September. This designation, like many others before, was preceded by ample warnings, allowing Boko supporters in the U.S. and elsewhere to cover their tracks.

Daniel Agbiboa: The Ongoing Campaign of Terror in Nigeria: Boko Haram versus the State

Hussein Solomon: Boko Haram, Identity and the Limits of Counter-Terrorism