Beyond Obamacare Lies the World Waiting … 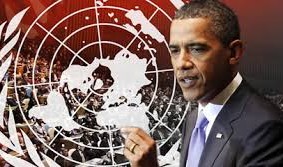 With the U.S. transfixed by the Obama Administration’s massively bungled attempt to nationalize one-sixth of the economy, the health welfare system, the rest of the world watches the slow motion unfolding of another debacle: the loss of post-World War II American leadership of the worldwide alliance for peace and stability.

Pro forma protests over snooping by the U.S. National Security Agency European and Latin American leaders are for popular consumption. Spying, and unfortunately counter-espionage which the Snowden revelations appear to be, have been and will continue to be a generally unspoken part of international relations. In fact, one can imagine German Chancellor Angela Merkel berating her own intelligence organizations for superior U.S. technology’s ability to listen to her limousine cell phone. The Saudis’ “renunciation” of a UN Security Council seat is no more than a media event. With their new vulnerability brought on by the Shale Revolution in the U.S., Riyadh’s antediluvian princes in their colorful robes have no place to go.

But these are tokens, taglines to a much larger eroding international picture.

Of course, the current disarray is not sudden, nor only the product of the Obama Administration. But Obama’s missteps have exaggerated growing difficulties for international governance “inevitably” arising from changes in the international balance of power over a half century since the Allied victory in World War II. And as always, of course, there is the unanticipated and the unintended consequences of well intended strategies and policies.

America’s junior partners, the European democracies, after five decades of unprecedented peace and prosperity, are facing domestic breakdown increasingly limiting their contribution to the world system. Social democratic remedies at the workplace have failed everywhere. A demographic catastrophe not only threatens their economies, but growing unassimilated immigrants from alien societies threaten to overwhelm their post-Christian cultures. A pampered public will not accept belt-tightening much less painful surgical elimination of waste and corruption. Greece, ancient home of democracy, is the apotheosis of the problem, a ticking time bomb on the doorstep of the rest of Europe.

Furthermore, the attempt to create an integrated European economy – let alone a new international polity that could speak with one voice on international affairs – is in jeopardy and probably failing. British participation, essential to the project, is now more remote than ever given the failures of the continental Euro and resurgent English as well as Scots and Irish nationalism.

European integration had been seen as the ultimate panacea. It is now clear that is not the case, nor, indeed, is it apparent it can even be effected. In Berlin Das Mädchen, representing the disproportionately most powerful of the member nation states, talks out of both sides of her mouth. She advocates a new European superstate but zealously guards Germany’s narrowest national interest as demanded by her role as an elected leader still obligated to put together an unstable governing coalition.

The Obama Administration’s answer to this dilemma is not that different from the waning years of the Bush Administration. President George W. Bush’s earlier steadfast resolve gave way to Condoleezza Rice’s “clerk” management. In any case, Washington’s stance toward Europe in part always has been a myth about who led whom and how during the post-World War II recovery. Alas! the charismatic and determined (if occasionally misguided) leadership of Churchill, Adenauer, DeGaulle, and de Gaspari, and their technocratic supporters, has been replaced by feckless politicians. The ‘80s decade-long common-sense reign of Prime Minister Margaret Thatcher was only brief relief from the general intellectual decline.

The American standard around which the Europeans rallied, even when they were in denial or hypercritical, has been replaced by a bogus concept of “leading from behind.” That kind of Machiavellian manipulation of others’ power would, under the best of circumstances, have been exquisitely difficult. But in the hands of the Obama amateurs, it descends into virtual chaos. Witness the Libyan intervention as its classic example. The Obama Administration and European friends failed to provide a model for a small, fragile but oil-rich Arab state. And the U.S. paid a terrible price with the murder of an ambassador and a major psycho-political blow to American prestige that will dog U.S. foreign — and domestic — politics for decades.

The naïve “transformation,” which an inexperienced but arrogant elitist presidential mafia thought they could foist at home on a traditional society (but one in revolutionary technological transition), has been matched with aberrant theory abroad. For whatever reason, the idea that the Obama Administration could make a pact with a nonexistent, romantic version of Islam — a political religious belief still mired alternately in pre-modern torpor and nihilistic violence — has shredded what was left of decades of strategy regarding the Middle East.

There, Washington now finds itself on the wrong side of virtually every issue. Reflexively, it nudges Israeli-Arab “negotiations,” which long ago foundered on Palestinian corruption and incompetence. Washington mistakenly believed it was the central issue, not the region’s poverty, illiteracy, tribal warfare and demagoguery. Obama’s refusal to intervene personally for a status of forces agreement to permit a continued military presence in Iraq squandered 4,000 American lives. It removed all possibility Washington could have a major impact on a recreated but highly volatile Baghdad and its enormous oil resources. Obama then launched into an effort to dethrone the barbarous Assad Syrian regime, backed away, and now finds U.S. Syrian strategy at the mercy of Russia’s Vladimir Putin, himself increasingly turning to despotism and foreign adventure to hang on to his throne.

The Obama Administration continuously has courted Iran, oblivious to that regime’s single-minded goal of making itself the hegemonic power and arbiter of the region’s vast fossil fuel resources. In the process, the White House ignores the interests of America’s long-time allies in the Gulf including, until now, the world’s largest oil producer, Saudi Arabia. The Obama Administration helped install and got into bed with the Muslim Brotherhood, the fountainhead of modern Islamic terrorism, apparently believing it some sort of Islamic equivalent of European Christian democracy. When that regime collapsed from ineptitude and domestic violence, Washington refused to accommodate to a popular military takeover endorsed by its other regional allies. President Obama’s “best friend,” Turkish Prime Minister Recep Tayyip Erdogan, has turned out to be a very bad regional weathervane. Even worse, Erdogan duplicity (confusion?) in dealings with Palestinian Islamists, Israel, the Brotherhood, the jihadists in the Syrian opposition (aided by an intelligence chief who favors Iran’s Shia fanatics) is adding to the regional chaos. Worst of all, Erdogan with whom Obama fellow-traveled, endangers what’s left of NATO by playing with Chinese weapons possibilities.

The continued U.S. entanglement in the Mideast, always predictable, has put into question Washington’s announced “pivot” of resources to meet the growing Chinese Communist aggressive feints toward East and South Asian neighbors and Washington’s friends. With that strange aloofness which characterizes this Administration’s treatment of allies, it has failed to respond enthusiastically to the first strong government in two decades in America’s keystone Asian ally, Japan. (Luckily reflex collaboration between the U.S. military and its Asian allies, a hangover from the Korean and Vietnam conflicts, has reinforced strategy in the absence of White House leadership.)

Perhaps the most important politico-economic Asia-Pacific instrument in Washington’s hands, the Trans-Pacific Partnership, an effort to create a common market to meet the competition of China’s state capitalism and subsidized trading, is hanging. The concern is that the Obama Administration’s next three lame-duck years, especially after the drubbing it seems now likely to take in next year’s elections, will not pursue it forcefully. In the balance is a revolutionary overhaul of a quarter of the world’s commerce and what may be the reemergence of a more vital Japanese economy.

Alternatively, the Obama Administration’s increasing reliance on the United Nations burdens that organization with more responsibility than its corrupt and incompetent secretariat can bear. Idealistic multilateralism is an excuse for lack of U.S. policy and inaction on a huge variety of fronts. Washington has, for example, increasingly abandoned leadership of the UN specialized agencies — whether the UN International Atomic Energy Agency, ignorant of the 17-year Tehran march toward nuclear weapons, or the growing specter of out of control biological breakthroughs that have enormous potential for solving life problems, or creating new diabolical weapons of destruction.

The shock and geopolitical lesson of 9/11 has been left behind somewhere in the bowels of the State Department and the Obama Administration’s National Security Council. Lost is recognition that the American homeland is no longer — if it had ever been in the world of intercontinental ballistic missiles — immune to the kind of destruction that our allies and enemies in Europe and Asia suffered in World War II.

With the strong prospect that the U.S. domestic scene will continue an impasse, as Obamacare fiasco has proved, America’s role abroad will be in abeyance. The world will just have to get along with the beached whale of a U.S — at least for a while.

A version of this column is scheduled for publication Oct. 28, 2013, at worldtribune.com