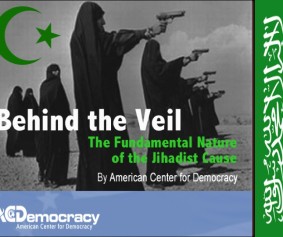 Behind the Veil: The Fundamental Nature of the Jihadist Cause, Click for the PDF or Youtube versions of this presentation.

Al Qaeda’s leadership is being challenged by the offshoot Islamic State of Iraq and the Levant, also known as ISIS.

The leader of ISIS Abu Bakr al Baghdadi was once in U.S. custody and is now declaring himself  the “caliph” or the prophesized leader of all Muslims.  A large number of young people in Africa and the Middle East are being sucked into ISIS and other similar Islamist terror groups.

These organizations are growing rapidly.  They are well-organized; they are well-funded;  and they reach out to these young people and they pull them in.

While many of the al Qaeda leaders have been killed, the newer generation of leaders of groups like ISIS and Yemen’s Al Qaeda in the Arabian Peninsula are more violent and more committed to imposing Sharia law and annihilating all non-Muslims.