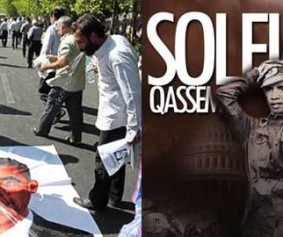 Despite President Obama’s outreach to the new president of Iran, Islamic radicals walked over a U.S. flag and spat on Obama’s image on their way to prayers on Friday.

Mashregh, the media outlet of the Revolutionary Guards, published a photo of the image of Obama alongside the U.S. flag laid on the ground and radicals walking over them. The picture shows one individual spitting on Obama’s image.

And while the Obama administration and U.S. media have generally portrayed the phone call and Twitter exchange between Obama and Iranian president Hassan Rouhani as evidence of warming relations, in September the website of the Quds cyber officers posted an image of Obama, wearing a Nazi field marshal’s uniform, surrendering with his hands on his head. The caption reads, “In the not too distant future…. One [Gen. Qasem] Soleimani is enough for all the enemies of this country.”

In an effort to emphasize the Islamic Republic’s view of the United States as the “Great Satan,” mass rallies will be held across Iran to shout “Death to America” and assail worldwide Zionism on the anniversary of the U.S. Embassy takeover of November 4, 1979, Brig. Gen. Seyyed Masoud Jazayeri, deputy chief of the Joint Armed Forces Headquarters, announced on Saturday.

“The crimes of leaders of America and international Zionism in their confrontation with the Iranian nation will never be erased from the public’s memory,” he said.

Jazayeri stated that ever since the Islamic Revolution, America has engaged in aggressive policies of blocking Iran’s wealth, helping Iraq in its war with Iran in the 1980s and espionage. Referring to the embassy takeover, he said, “If the American spies in Tehran under the cover of diplomats who were hatching plots were not arrested, today we would have witnessed 10 times more damage to our country and the surrounding countries.”

While the efforts of Rouhani were lauded by regime leadership and Guards commanders, his telephone call with Obama drew criticism.

The supreme leader, Ayatollah Ali Khamenei, referring to the call, stated that some aspects of Rouhani’s efforts in New York were “not proper” and said the Islamic regime has no trust in America. The chief commander of the Revolutionary Guards in an earlier statement criticized Rouhani for taking the call and said he should not have spoken to the U.S. president.

Rouhani in interviews after returning home stated that the White House had requested the call five times and he decided to take it while en route to the airport.

At the Friday prayers, Mohammad Hossein Safar Harandi, a member of the Expediency Discernment Council of the regime, said the new approach by Rouhani is a tactical approach and referred to the Sureh Al-Fath in the Quran: “God in the Sureh Al-Fath points to a condition which is similar to the current condition … a situation where the hand of the infidels and nonbelievers is restrained from the believers.”

Harandi said that Allah sees engaging the U.S. as necessary to complete the “final victory” of Islam.

According to a Guard member who recently defected to Turkey, Iran’s economy is teetering on the brink. Soon the government will not be able to pay its employees. He said the regime fears a massive uprising not only by most Iranians who resent the regime and its ideology but also from the poor, which would then assure the downfall of the regime. Thus regime leaders are trying this new approach, to engage the U.S. in seeking sanctions relief without giving up their nuclear program.

The same tactic was used by the regime in 2003. A recently revealed video of Rouhani before the Iranian June presidential elections shows Rouhani boasting about deceiving the West and advancing Iran’s nuclear program during his tenure as the head of the Islamic Republic’s nuclear negotiating team in order to jumpstart the program while promising cooperation.

Referring to the image of radicals walking over the U.S. flag, one prominent Iranian pro-democracy advocate, Shabnam Assadolahi, sent a tweet to Obama: “A must-see photo: @BarackObama are you still open to dialogue and communication with this dangerous regime?”

Despite several United Nations resolutions and sanctions by the U.N., United States and European Union demanding a halt to Iran’s illicit nuclear program, the Islamic regime has significantly expanded the program and currently has over 18,000 centrifuges, with enough enriched uranium for more than six nuclear bombs. At the same time it is set to complete its heavy-water plant, which would give the regime a second path to nuclear weapons by acquiring weapons-grade plutonium.

*Reza Kahlili is a pseudonym for a former CIA operative in Iran’s Revolutionary Guard and author of the award-winning book “A Time to Betray“ (Simon & Schuster, 2010). He serves on the Task Force on National and Homeland Security and the advisory board of the Foundation for Democracy in Iran (FDI).

This article was originally published here.