“Antisemitism can even be found in the halls of the United Nations,” said the joint statement signed by only 40 of the 193 United Nations member states on January 22, 2015. Really?

The joint statement was signed at the informal meeting on Antisemitism at the UN General Assembly, January 22, 2015, to “rededicate” member states “to eliminate Antisemitism in all its forms.” 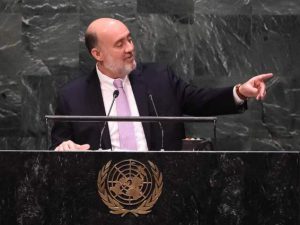 “We don’t need any more monuments commemorating the Jews who were murdered in Europe, we need a strong and enduring commitment to safeguard the Jews living in Europe.”

“Antisemitism is a topic that is very close to my heart.  My grandmother, Elfrida, was born in Germany and endured the harassment and hardships that a Jew in Europe faced at the time.

“By 1936 she knew that there was no future for her or her family in Germany.  Just a few months earlier, the Nazis passed the Nuremberg Laws declaring Jews second-class citizens and revoking their political rights.  Day by day, she saw Jews being degraded and dehumanized – they were being deprived of their rights, their jobs, and their freedoms. My grandmother took my father and his sister and fled Berlin for Israel.

“I was born in Israel 13 years after the Holocaust ended.  Growing up, I knew many Jews who had survived the barbarity of the Nazis.  I saw the numbers tattooed on their arms and I heard their heartbreaking stories.  In a few weeks, I will become a grandfather for the first time.  My son’s wife, Maya, is sitting over there.  It pains me to know that my granddaughter will be born into a world that it still stained by antisemitism…

“The world pledged ‘Never again,’ but here we are again.

“Seventy years after the Holocaust ended, European Jews are once again living in fear. Two weeks ago, we watched in horror as innocent Jews were murdered in a Paris grocery store.  Before the Paris siege, it was the gunman who murdered a rabbi and three young children in front of a Jewish school in Toulouse, including Rabbi Monsonego’s daughter, Miriam, and the shooting at the Jewish Museum of Belgium.

“Violent antisemitism is casting a shadow over Europe.   Last summer, anti-Israel demonstrations in Paris turned into violent riots, graffiti reading “Jews your end is near” were scrawled on the walls of Rome, Jews were banned from stores in Belgium, an angry mob beat an elderly Jewish man in Hamburg, and firebombs were thrown at Jewish homes in Amsterdam and Berlin.

“These hate crimes aren’t confined to the masses on the streets.

“A theater in London refused to host the U.K. Jewish Film Festival.  An Italian historian called for Israel to face a “Nuremberg Trial.” And a popular Spanish newspaper published an article saying, and I quote, “It’s not strange [that the Jews] have been so frequently expelled.” End of quote.

“The words of hate aren’t confined to places across the Atlantic.

“Antisemitism can even be found in the halls of the United Nations.  Disguised as humanitarian concern, a number of delegates have used the General Assembly, this podium, to voice their antisemitic sentiments.

“Following last summer’s conflict in Gaza, a handful of delegations stood at this very podium and accused Israel of behaving like the Nazis and creating a Holocaust. This is not legitimate criticism of Israel. It doesn’t matter how much you are angered or frustrated by our conflict, there is no excuse for antisemitism – not on the streets, not in the media, not in your governments, and not in this institution.

“If you believe in freedom and tolerance, then you must have the courage of your convictions.  A number of international leaders have taken a clear and vocal stand against antisemitism and I commend them.  Israel welcomes the historic joint statement put forward by more than 40 member states and we invite other states to join us in this effort.

“Every nation must speak out as clearly as French Prime Minister Manuel Valls who declared, ‘When the Jews of France are attacked France is attacked, the conscience of humanity is attacked.’

“Every nation must also speak as clearly as Chancellor Angela Merkel who said, “I do not accept any kind of anti-Semitic message or attacks at all, not least the ones that were…seen at the pro-Palestinian demonstrations, disguised as alleged criticism of the policy of the state of Israel.” End of quote.

“Europe is being tested. We don’t need any more monuments commemorating the Jews who were murdered in Europe, we need a strong and enduring commitment to safeguard the Jews living in Europe.  If the governments of Europe succeed in defending their Jewish communities, then they will succeed in defending liberty and democracy.

“On your walls, O Jerusalem, I have appointed watchmen; all day and all night, they shall never be silent.”

“Israel will never be silent.  We will stand guard and we will safeguard the Jewish state and the Jewish people.

“We have seen the evil that man is capable of, and so we must be vigilant.  We must spot the warning signs and act swiftly to condemn antisemitism.  I call on every nation to stand tall beside us.  Refuse to allow evil to take root.  Refuse to be silent.  And refuse to submit to indifference.  Let the message echo from the halls of the UN to the streets of Europe to the capital of every nation – stand for human rights and human dignity by taking a stand against antisemitism.

“We are deeply concerned that in recent years there has been an alarming increase in Antisemitism worldwide. Antisemitism is a manifestation of racism, xenophobia and religious intolerance. In recent years, we have witnessed increased incidents of hatred, intolerance, discrimination and violence against individuals based on their religion or belief. Sadly these acts have also targeted institutions including schools, cultural centers and places of worship. The Jewish Community has been particularly targeted.

“Even as the Holocaust remains a part of living memory, Jewish communities around the world are once again under attack, and in certain parts of the world Jews are attacked for exercising their Human Rights of Freedom of peaceful assembly and association and freedom of opinion and expression.

“The recent terrorist attack against a kosher supermarket in Paris in January 2015 is a painful reminder that Antisemitism remains an urgent problem that must be addressed. The United Nations must step forward and play a pivotal role in combating Antisemitism as well as intolerance, discrimination and violence based on religion of belief. It is a moral imperative for this institution to call on governments around the world to promote tolerance and mutual respect in their societies.

“Based on our conviction of the need to counter all forms of religious intolerance, we therefore call all member states to:

a) Declare their categorical rejection of Antisemitism;

b) Encourage political leaders and, public figures, and educators to publicly and vocally condemn antisemitic incidents and consider designating government officials to monitor and address all forms of discrimination based on religion or belief, including Antisemitism;

c) Review their national legislation and ensure appropriate mechanisms for combating discrimination based on religion or belief, including Antisemitism;

d)  Promote opportunities for educational initiatives and teacher training programs that provide young people with education on the subject of Antisemitism;

e) Monitor crimes, including of antisemitic nature, and effectively investigate them in a prompt and impartial manner with the aim of prosecuting those responsible;

g) Welcome UN DPI’s plan to organize follow-up conference to the “Unlearning Intolerance” series started in 2004, including on Antisemitism, with a goal to review progress and identify new challenges;

“The determination to eradicate the conditions that gave rise to the Holocaust was a guiding principle among the founders of this organization over six decades ago. Let us rededicate ourselves to that principle and endeavor to eliminate Antisemitism in all its forms.”​