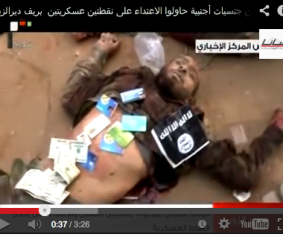 A bankcard and a credit card issued by the Saudi Al Rajhi bank, as well as other possessions of an al-Qaeda operative who was killed in Syria last week, were shown on the Syrian official TV station and posted on YouTube* on December 12, 2013. This was part of a report detailing the army’s success in thwarting several coordinated attacks in the area of the eastern district of Dir A-Zor (ديرالزور) by al-Qaeda affiliate, The Islamic State in Iraq and the Levant (ISIL).

The report, which was downloaded and translated from Arabic by ACD Senior Fellow, Jonthan D. Halevi, talked about Syrian army forces’ operations in the area surrounding the village of Ayyash (عياش) that killed and injured 100 ISIL fighters. Among the dead terrorists were many foreign nationals, including three Tunisians, two Moroccans, two British, an Egyptian, and a Saudi.

The camera focused for few seconds on the body of one ISIL operative, the Saudi subject who was killed in the battle. The personal belongings of Yusuf Marzouki Abd al-Rahim Shahata [يوسفمرزوقيعبدالرحيمشحاتة] on the camera showed a credit card, bankcard, phone card, and cash (USD notes) that were placed on his body for display.

Partial details of his credit card:

Following Shahata’s al Rajhi’s credit, and especially bankcard trail, should help expose al Qaeda’s operations in Syria and beyond. But don’t expect al Rajhi’s cooperation, or that of the Saudi government.

Al Rajhi bank has a long and proud track record of funding al Qaeda and other jihadist organizations, with the blessing of the Saudi government. But the United States, even after 9/11, willfully ignored and publicly denied that the Saudis “knowing” involvement in terror financing. Thus, U.S. Secretary of State Hillary Clinton’s Wikileaked telegram to U.S. embassies on “terrorist finance” show evidence of the complicity. On December 30, 2009, Clinton wrote, “donors in Saudi Arabia constitute the most significant source of funding to Sunni terrorist groups worldwide”. Yet a few days after a Treasury Department official testified the same in Congressional hearing, a press release announced that he had resigned “to spend more time with his family.” This is but one example of the U.S. government refusal to identify members of the Saudi royal family, the government, and individuals as funders of terrorism.

More recently, in July 2012, HSBC was fined $1.9 billion for laundering money and funding terrorism, after the Senate’s Permanent Subcommittee on Investigations found that it ignored “links to terrorist financing among its customer banks, including Riyadh, Saudi Arabia-based Al Rajhi Bank, which had ties to terror groups through its owners…” Internal documents show HSBC decided to cut ties with the bank before reversing itself under pressure from Al Rajhi, which received shipments of $1 billion in cash from HSBC’s U.S. operation from 2006 to 2010 … HSBC’s U.S. unit “offers a gateway for terrorists to gain access to U.S. dollars and the U.S. financial system.”

Yet in April 2013, al Rajhi was the recipient of the 2013 REGIONAL WINNERS Gulf Cooperation Council (GCC) Award, as the World’s Best Islamic Financial Institution. Al Rajhi was also Euromoney Magazine’s 2012 award winner as the Best Islamic Bank in the Middle East.

Officials from many Western counties have voiced their growing concerns that their citizens are joining al Qaeda’s jihad in Syria, which is said to serve as the jihadists’ finishing school for those who survive the fighting. Open source information, such as presented in the Syrian TV and posted on YouTube, should be a good source to follow al Qaeda’s Al Rajhi’s global money trail.