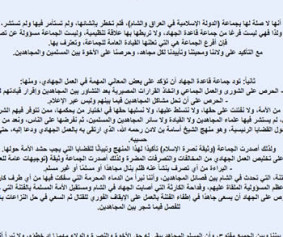 [At left] From the text of Al-Zawahiri’s announcement concerning Al-Qaeda’s repudiation of the Islamic State in Iraq and Greater Syria. The announcement was published on Islamist forums affiliated with Al-Qaeda (www.muslm.org)

1.    On February 3, 2014, Islamist forums posted an announcement on behalf of the General Command of Al-Qaeda, led by Sheikh Ayman al-Zawahiri. The announcement, dated January 22, denies any connection with the Islamic State in Iraq and Greater Syria[1] (hereinafter: the “Islamic State”), led by Abu Bakr al-Baghdadi (hanein.info; muslm.org).

2.    Al-Zawahiri’s announcement is an unequivocal decision in favor of the Al-Nusra Front in the power struggles that took place over the past year between this organization and the Islamic State, headed by Abu Bakr al-Baghdadi. We believe the announcement could strengthen the position of the Al-Nusra Front versus the Islamic State, intensifying the rift between them, and that the Al-Nusra Front may continue to join forces with other rebel organizations against its rival. However, despite the internal power struggles, we believe that organizations affiliated with Al-Qaeda and the global jihad will continue to enjoy meaningful influence among rebel groups in Syria.

3.    In its conduct in the face of the power struggles in Syria and Iraq, Al-Qaeda’s leadership, led by Al-Zawahiri, displayed weakness and a lack of effective control over its branches in the Middle East in the post-Osama bin Laden era. On the other hand, the Middle East, with Syria in its center, has become the new worldwide power center for Al-Qaeda and the global jihad, taking advantage of the chaos created by the Syrian civil war, the deepening Sunni-Shiite schism, and the weak governance in key countries in the Middle East due to the regional upheaval. This new power center is liable to threaten the Arab-Muslim world as well as Israel and the West.

4.    Thus, in Syria, the new global jihad center, a bipolar system of rival organizations, both of them identifying with Al-Qaeda’s ideology, has now been created: at one pole of the system there is the Al-Nusra Front, Al-Qaeda’s formal branch, which has better military and logistical capabilities than its rival, and whose status among the rebels and among the population is stronger. At the other pole of the system there is the Islamic State, which does not obey the instructions of Al-Qaeda’s leadership and relies on its infrastructure in Iraq, Syria’s “backyard.” Between these two rival poles there are rebel groups in Syria, with tens of thousands of operatives. They adopt the jihadi ideology and are prepared for ad hoc cooperation with the Al-Nusra Front and sometimes with the Islamic State as well. However, those jihadi groups refuse to be formally affiliated with Al-Qaeda.

5.    The internal rift among organizations affiliated with the ideology of Al-Qaeda is liable to have an impact on other global jihad networks throughout the Middle East. At this stage, the Mujahideen Shura Council in the Environs of Jerusalem, the prominent terrorist organization in the Gaza Strip affiliated with the global jihad, has already taken a stand in the conflict in favor of the Islamic State (while paying lip service to Ayman al-Zawahiri). Other organizations in various countries in the Middle East may also join one side or the other, while others may prefer to “sit on the fence”. Hence we may be witnessing the beginning of a process in which a new regional system of Al-Qaeda and the global jihad is taking shape, with far more complex and decentralized characteristics than those that characterized Al-Qaeda in Afghanistan and Pakistan in the Osama bin Laden era.

Al-Qaeda’s announcement regarding its repudiation of the Islamic State

7.    The announcement went on to state that Al-Qaeda’s leadership adheres to the principle of unity of the Islamic nation, in accordance with Osama bin Laden’s perception, and to the principle of avoiding harmful controversy. The announcement also notes that Al-Qaeda’s leadership has no part in the struggles between the various factions of the jihad fighters in Syria, is calling on them to stop, and has expressed an interest in maintaining good relations with all jihad fighters.

8.    The Al-Nusra Front, Al-Qaeda’s branch in Syria, chose not to comment on the announcement to date. The Islamic State, however, reacted sharply to both Al-Qaeda and the Al-Nusra Front.

10.  The Mujahideen Shura Council in the Environs of Jerusalem (hereinafter: the “Shura Council”), the most prominent global jihad organization in the Gaza Strip, has taken a stand in favor of the Islamic State, paying lip service to Ayman al-Zawahiri and his call (in the past) for unity among jihadi organizations.

11.  On February 2, 2014, the Shura Council published a detailed announcement replete with Islamic religious and historical motifs. The announcement begins by condemning the civil war in Syria between jihad fighters, which is rooted in “the unjust behavior towards the Islamic State and its leader, the Emir of the Believers, Abu Bakr al-Baghdadi. Muslims, according to the announcement, are obliged to help the members of the Islamic State and establish its foundations, but instead, “various people” have fallen into a civil war and have washed their hands of the jihad fighters.

12.  The announcement goes on to express its support for the call of “our sheikh, the smartest man in our nation, Sheikh Ayman al-Zawahiri, may Allah preserve him, regarding the need for jihad fighters in Syria to join together in an Islamic state, which they will agree on, because jihad needs a leader … ” However, the announcement does not refer to Al-Zawahiri’s latest announcement, repudiating the Islamic State, and fails to mention the Al-Nusra Front.

13.  The announcement goes on to reiterate its support of the Islamic State: “It […] should be noted that the campaign in Iraq and al-Sham (Syria) is one; and that the heads of the Islamic State in Iraq have already proved their righteousness and their ability to manage the nation’s campaigns […]”  The announcement again calls on jihad fighters to reach agreement on a single ruler who will lead them according to Islamic law, who will impose Islam and who, “with Allah’s help, will topple the vile heretics” (bentaymia.tumblr.com). 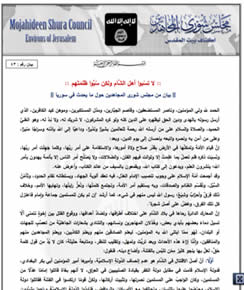 From a statement by the Mujahideen Shura Council in the Environs of Jerusalem supporting the Islamic State (bentaymia.tumblr.com)

The background of Al-Zawahiri’s announcement

14.  Ayman al-Zawahiri’s announcement is an unequivocal decision in favor of the Al-Nusra Front in the fierce power struggles conducted over the past year between Al-Qaeda’s branches in Iraq and Syria. The Al-Qaeda command, headed by Ayman Zawahiri, was dragged into these power struggles, but its attempts to resolve the conflict or at least calm the situation have only exacerbated it. Following are some milestones in these battles:

a.  The Al-Nusra Front was founded in Syria in January 2012 by Al-Qaeda’s branch in Iraq, which initially ran it. Initially, the Syrian “Emir,” Abu Muhammad al-Julani, received his orders from the “Emir” of Al-Qaeda in Iraq, Abu Bakr al-Baghdadi, who controlled both branches of Al-Qaeda, in Iraq and in Syria. In order to formalize his seniority and control, on April 9, 2013, Abu Bakr al-Baghdadi announced the merger of the organizations in Iraq and Syria under the name of “the Islamic State in Iraq and Greater Syria.”

b.  Abu Muhammad al-Julani, leader of the Al-Nusra Front, refused to subordinate his organization to the leader of the Islamic State. One day after Al-Baghdadi’s announcement (April 10, 2013), he quickly pledged allegiance to Ayman al-Zawahiri, the leader of Al-Qaeda. Al-Zawahiri, who was dragged into the power struggles between the two organizations, took sides on June 10, 2013, when he announced the cancellation of the merger between the Al-Nusra Front and the Al-Qaeda branch in Iraq. In a letter to the operatives of the Al-Nusra Front, he announced that Al-Baghdadi had erred when he declared the merger without the approval of Al-Qaeda’s leadership, but called on the two branches to cooperate with one another.

c.  Al-Zawahiri’s taking sides in the dispute did not resolve the conflict between the two rival organizations. On the contrary, in retrospect it exacerbated it. During the six months that have passed since Al-Zawahiri’s announcement, the rivalry between the two organizations has increased and has, from time to time, erupted into violent confrontations between them. Hence, in practice, two rival organizations have emerged in Syria, both affiliated with Al-Qaeda’s ideology, each of which has adopted operating methods that distinguish it from the rival organization. While the Al-Nusra Front has conducted itself relatively pragmatically, in its attitude to the population and its cooperation with other rebel organizations, the Islamic State has adopted rigid doctrinal operating methods that have caused severe tensions between the Islamic State and the Syrian population, and between it and the other rebel organizations, which have initiated violent confrontations against it.

d.  Another attempt to mend the rift was made by Ayman al-Zawahiri on October 11, 2013. In an appeal distributed on Islamist websites, he called on Islamic forces operating in Syria to unite in order to establish a jihadi country that would pave the way for the return of the Islamic Caliphate and the “liberation of Jerusalem.”  However, this request also fell on deaf ears: The rift between the two organizations has grown, and the tension between them, accompanied by violent clashes, has increased. Thus, Al-Zawahiri has been forced to take a unilateral stand, employing more rigid and aggressive rhetoric towards the Islamic State.