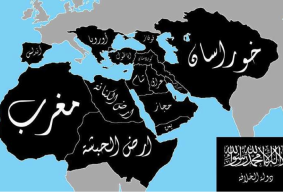 The successors to Mohammed as leaders of the Muslim religion bore the title of “Caliph”.  The Caliphate has undergone numerous historical transformations and was never recognized by the Shiites, who claim that the legitimate line was cut short by illegitimate usurpers.

After the Mongols captured Baghdad in the thirteenth century the Caliphate moved to Cairo.  When Egypt was conquered by the Turks in the sixteenth century, the Ottoman sultans adopted the title and assumed the leadership of Sunni Islam, at least in the Arab world, to accompany their political dominance. In 1923, under the leadership of Kemal Ataturk, the Turkish National Assembly abolished the Caliphate and exiled the last caliph and his family.  Since then, Sunni Islam has been leaderless.

At present, any prominent cleric can issue an authoritative ruling (“fatwa”), which if unchallenged by others of equal stature, becomes part of religious or “Sharia” law.  In the absence of a caliph, the religious authorities of al-Azhar University in Cairo and its ruling sheik have achieved a degree of acceptance as the final word on religious subjects. When al-Qaida was founded by the Saudi Osama bin Laden, one of its stated objectives was the reestablishment of the Caliphate.

In recent years, and in the context of the bloody civil war in Syria, an al-Qaida offshoot was formed, the name of which is translated in various ways, but which is dedicated to the implantation of a new caliphate throughout the Middle East, the Islamic Caliphate (or State) of Iraq and the Levant (or Syria), ISIL or ISIS.  ISIS has established itself as the principal Jihadist group fighting the Assad regime in Syria. It is thought to have 12,000-18,000 well-armed and -trained fighters, and funded principally from Saudi and Qatari sources. More recently, ISIS has targeted the Sh’ia-dominated government in Iraq, first taking control of primarily Sunni Anbar province bordering on Syria, forcing a major offensive by the Iraqi army to dislodge them, and now attacking Baghdad directly, infiltrating through Sunni-dominated neighborhoods.

ISIS is also attempting to interfere with Baghdad’s water supply from the Euphrates River by diverting its flow.  Whether this new offensive will succeed is not yet clear, but what is clear is that a major effort is underway to create a Sunni-Sh’ia armed confrontation in Iraq, and thus replicate the Syrian civil war, turning Iraq into another failed state in the region with only Kurdistan in the north relatively stable.

As usual, the media are ignoring this situation while they concentrate attention on the latest antics of Mr. Abbas. Iranian intervention will be inevitable if the ISIS offensive succeeds in destabilizing the Iraqi regime, since Iraq is sixty percent Sh’ia and Iran would not tolerate another hostile government on its western border, as it had during the entire Saddam period, which included an eight-year war between the two countries.  As in Syria, this would pit the Iranians against the Saudis and the Gulf States; and, if Iran intervenes militarily, would put Iranian troops on the Kuwaiti and Saudi borders.

The implications of such developments elsewhere in the region would include a further hardening of the sectarian split in Islam and an even greater confluence of interests between Israel and its secular neighbors — such as Egypt and Jordan and the states of the Arabian Peninsula — to confront such an Iranian offensive.  Out-of-region powers are unlikely to have much influence in such a potential scenario.

Perhaps the Turkish National Assembly will repeal the act of 1923, find a descendant of the last caliph, and reclaim the Caliphate. In the Middle East anything is possible and nothing is impossible.

* This commentary was originally published in Globes.