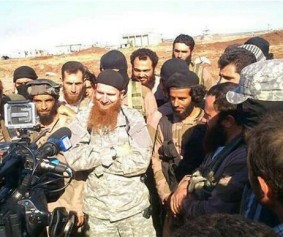 The U.K.’s domestic intelligence service, MI5, is worried about the Britons who join al Qaeda’s jihad in Syria. In a recent in aparliamentary hearing,  Andrew Parker who heads MI5 said  that the danger is that al Qaeda will task the British citizens who are willing to engage in terrorism at home – in the U.K. “where they [could] have higher impact.”

The estimate is that 5,000 to 10,000 foreign fighters, mainly from Europe and North America arrived in Syria to join al Qaeda since the beginning of the uprising against Assad in 2011. Many are Muslim converts.

Immigration to Europe and the U.S., and birthrate largely explains the fast growing numbers of Muslim there. In the United States, where a few thousand Muslims were identified in 1900, their number grew to somewhere between 1.8, according to the 2011 survey of the Pew Research Center, and 6 million, according to U.S. Muslim organizations.

Notably, Pew’s survey found that 20 to 25 percent, about 450,000, of U.S. Muslims are converts. An earlier Pew studyin 2007, showed that 49 percent of the U.S. converts became Muslims by the age of 21, and that 58 percent converted for religious reasons as opposed to 18 percent for family and marriage reasons.

A 2007 survey in England and Wales found that of the 2.7 million Muslims only 100,000 are converts. For every male convert in both Britain and the U.S. there are as many as four females. Thus far, no further studies explain this phenomenon.

When Burak Karan, an up and coming German-Turkish soccer star, was killed last month during a Syrian military raid on anti-Bashar al Assad rebels near the Turkish border, he joined a list of football players turned militants who were in the Middle East and North Africa or had roots in the region or in Islam.

In contrast to Palestinian suicide bombers in Israel a decade ago who were rooted in a West Bank soccer team, the 2004 Madrid train bombers who played the beautiful game together or several Saudi players who joined the anti-American jihad in Iraq following a fatwa or religious ruling by conservative Muslim preachers denouncing football as a game of the infidels, it was not immediately clear whether Mr. Karan was driven to give up his promising soccer career by a radical interpretation of Islam or a deep-seated humanitarian concern for the victims of brutal wars like that in Syria.

What Mr. Karan shared with players-turned-jihadists as well as various jihadist leaders including Osama Bin Laden, Hamas Gaza foreman Ismail Haniyeh and Hezbollah chief Hassan Nasrallah was a deep-seated passion for the sport and that their road towards militancy often involved an action-oriented activity, soccer. Mr. Karan’s case is nevertheless more similar to that of Yann Nsaku or Nizar ben Abdelaziz Trabelsi, individuals who radicalized, rather than the Hamas or Madrid bombers or the Saudi players who turned militant in the context of a group.

Mr. Nsaku, a Congolese born convert to Islam and former Portsmouth FC youth center back, was one of 11 converts arrested in France a year ago on suspicion of being violent jihadists and for “suspected Islamic terrorist plotting of anti-Semitic attacks,” according to French police. Police said the group aimed to spark a “war across France” with the intention of imposing Islamic law.

A 19-year old, 6ft 2ins player, Mr. Nsaku was signed in 1998 by Portsmouth from Cannes FC but never made it into the troubled 2008 FA Cup winners’ first team. His promising career ended in 2011 when he suffered a knee injury.

Mr. Trabelsi, a Tunisian who played for Germany’s Fortuna Düsseldorf and FC Wuppertal, was arrested and convicted in Belgium a decade ago on charges of illegal arms possession and being a member of a private militia. Mr. Trabelsi was sentenced to ten years in prison.

In all cases, soccer proved to be a fruitful grooming if not recruiting ground. Mr. Karan may not have been recruited off the pitch and instead have reached out to individuals or groups who could him help join a militant cause. However, men like assassinated Bin Laden and Messrs. Haniyeh and Nasrallah recognized the game’s useful bonding and recruitment qualities. It brings recruits into the fold, encourages camaraderie and reinforces militancy among those who have already joined.

Unlike Mr. Nsaku, 26-year old Mr. Karan, who adopted the nom du guerre Abu Abdullah at-Turki, appeared to be destined for stardom, before he opted out at age 20 in favor of the Syrian struggle. He had played internationally seven times for Germany alongside soccer giants as Sami Khedira, Kevin-Prince Boateng and Dennis Aogo.

Mr. Karan’s death by a bomb dropped by the Syrian air forces in the village of Azaz, near the Turkish border became public in an almost seven-minute You Tube video believed to have been posted by an unidentified Islamist group. Amid ideological justifications of jihad and pictures of him with children whose faces are unidentifiable but are believed to be his sons who together with his 23-year old wife travelled with him to Syria as well a Kalashnikov rifle, Mr. Karan asks his mother in Arabic not to bemoan his death. Speaking to German media, Mr. Karan’s brother Mustafa cast doubt on the video saying Burak struggled to speak Arabic.

A text in Arabic and German cautioned “not to assume that those who died on Allah’s way are dead. No. They are alive with their Lord and being taken care of… Those that listened to Allah and the Messenger (Prophet Mohammed) after they suffered a wound – for those among them who do good and are fearful of God, there will a fabulous reward.”

Mr. Karan’s jihadist history appears to suggest that he prepared for his engagement in Syria alongside an estimated 200 other Germans mostly of Turkish origin, while in an Al Qaida training camp in Pakistan. German intelligence sources said Mr. Karan had first appeared on their radar because of his contacts with Emrah Erdogan, a German Turk, who was arrested a year ago in Tanzania on suspicion of involvement in the bombing of a Kenyan shopping center and extradited to Germany, and according to German news magazine Der Spiegel, with Austrian-Egyptian imam Mohamed Mahmoud.

Mr. Emrah is on trial in Frankfurt on charges of being a member of Al Qaida in Pakistan and of the Al Shabab in Somalia. He is alleged to have been in the Pakistan-Afghan border region in 2010 and to have then joined Al-Shabab.

Mr. Mahmoud was an imam at a mosque in the western German town of Solingen and leader of an Islamist group called Millatu-Ibrahim that was banned in Germany last year for “efforts against the constitutional order and against the concept of international understanding.” He evaded arrest at the time but has since been detained in Turkey where he is believed to be in prison.

Mr. Karan joined the rebels after collecting relief donations and sending food and drugs to Syria. “If he armed himself it was to protect transports. Was he supposed to throw stones? He always told me he doesn’t want to fight,” Mustafa told Germany’s Bild Zeitung.

*James M. Dorsey is a senior fellow at the S. Rajaratnam School of International Studies, co-director of the University of Würzburg’s Institute for Fan Culture, and the author of The Turbulent World of Middle East Soccer blog and a forthcoming book with the same title.