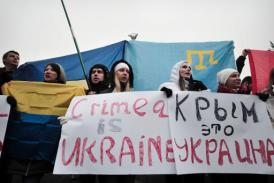 Muslims in Ukraine: A Small Problem Amid a Larger One, By J. Millard Burr
While ousted President Viktor Yanukovich’s press conference diverted the media’s attention, Russians forces, allegedly took over two airports in Crimea. Earlier today, Mufti Kamil Samigullin, chairman of the Spiritual Muslim Board of Russia’s Republic of Tatarstan called “on Muslims to abide by the humanistic values of Islam and demonstrate an example of love for all people to entire Ukrainian society,”

…What will happen in the Ukraine’s Crimean Peninsula?  If the Russophobes in Kiev retain the power they have won, will the emerging Russophobia lead Russia’s President Vladimir Putin to seize the Crimea where ethnic Russians comprise about sixty percent of that region’s population?  Most importantly, as Sevastapol serves as a singularly important Russian naval base and is home to Russia’s Black Sea fleet, the possibility that Russia will move against Kiev to protect its interest is all too real..

Are Mosques Recruiting Foreign Fighters for Syria? By Rachel Ehrenfeld
At least 11,000 Sunni, and 10,500 Shiite foreign fighters from 74 countries (not including Iranian “advisors”) are reported to have joined the struggle over Syria. However, we know little about the recruiting mechanism that led them to Syria. Were these Jihadists recruited on the Internet, or by Imams and other Shiite and Sunni religious leaders in their home countries? .

A World Ablaze – But Different Fuels, By Sol Sanders
At the moment, we have one bitter internecine war in Syria, and three incipient revolts between two or more elements in Ukraine, Venezuela, and Thailand. Other conflicts, even messier to define, are growing in the Central African Republic and Nigeria.
The question, of course, is whether there is anything that connects all these conflicts? And, if so, what if anything can be done to lessen tension and conflict?  more…

Review of John Judis’ Genesis
The jacket of journalist John Judis’ new book features a photo of Harry Truman, placed so that only one of his eyes stares out from the cover. This is probably meant to signify the president’s failure to see clearly the morass into which his misguided Middle Eastern policy would ultimately lead the United States. But Truman is guilty, according to Judis.

Islam and the Other: The al-Wala’ wal-Bara’ Doctrine, by David Bukay
Given the U.S. capitulation to Iran, the growing American and European pressure on Israel to relinquish its national security and identity as the Jewish state in favor of the Palestinians, while Syria has become the training “melting pot” for Islamist terrorists the world over, it is vital to understand the Islamic worldview concerning others (non-Muslims), as vividly illustrated in the al-Wala’ wal-Bara’ doctrine.  Accordingly, Islam is superior, and to maintain its superiority Muslims are required to hate and fight ‘others’ who resist Islam’s domination of the world.

The latest from our fellows and colleagues:

Terrorism and Fake Indian Currency Notes (FICNs): A Growing Menace: Animesh Roul
The fake currency trade has been haunting Indian security establishments as well as economic intelligence agencies for quite a long time. Most recently in February 2014, the finance minster of India informed the Upper House of Parliament (Rajya Sabha) that counterfeit Indian currency notes worth INR 107.33 crores (approximately US $ 17 million) have been seized between January 2010 and June 2013.

The Impending Clash between Iran and Saudi Arabia: Lt. Col. (ret.) Jonathan D. Halevi writing for the Jewish Center for Public Affairs
Khomeini set the tone for Iranian-Saudi relations in the first decade of the Islamic Republic, challenging the legitimacy of the Saudi regime to serve as the protector of the Muslim holy sites in Mecca and Medina. In 1987, Khomeini declared that Mecca was in the hands of a “band of heretics”

China’s President Heads Cybersecurity Body, AP/TIME
“Chinese President Xi Jinping has put himself in charge of a new body to coordinate cybersecurity, in a sign of Beijing’s concern over its vulnerability to online attacks and its desire to retain tight control over the Internet…Efforts should be made to build our country into a cyberpower,” Xi was quoted as saying, calling for more innovation in the industry and improvements to Internet access and connection speeds.”

Forget China: Iran’s Hackers Are America’s Newest Cyber Threat:
Shane Harris, Foreign Policy
In March 2012, Ayatollah Ali Khameini, the Supreme Leader of Iran, publicly announced the creation a new Supreme Council of Cyberspace to oversee the defense of the Islamic republic’s computer networks and develop news ways of infiltrating or attacking the computer networks of its enemies. Less than two years later, security experts and U.S. intelligence officials are alarmed by how quickly Iran has managed to develop its cyber warfare capabilities — and by how much it’s willing to use them.

Congressional Testimony on the Persecution of Christians in Africa, With Focus on Boko Haram, Khataza Gondwe, Ph.D.
The majority of Christians in sub Saharan Africa experience hostility, harassment, repression, restrictions or violence on account of their faith suffer  as a result of two main sources. Firstly, there is a seeming proliferation of militant Islamist insurgencies that have taken advantage of pre-existing  local issues, weak application of the rule of law, or vacuums caused by the chronic failure of state structures to establish strongholds…Secondly, Christians suffer in countries led by authoritarian regimes whose governing political ideology or religious dogma includes an underlying hostility to pluralism in any form…
The Nigerian terrorist group Boko Haram and its off shoot Ansaru, provide the clearest example of the former trend.  more…

Bitcoin Exchange Mt. Gox Files for Bankruptcy Protection: Wall Street Journal
Bitcoin exchange Mt. Gox said it was filing for bankruptcy protection and that 750,000 of its customers’ bitcoins had been lost. Is the end of the crypto-currency or merely growing pains? Columbia Business School assistant professor Moshe Cohen discusses on MoneyBeat. The company said it also lost around 100,000 of its own bitcoins. Together, the lost bitcoins would be worth approximately $473 million at market prices charted by the CoinDesk bitcoin index.

Energy firm cyber-defence is ‘too weak’, insurers say: Mark Ward, BBC
Power companies are being refused insurance cover for cyber-attacks because their defences are perceived as weak, the BBC has learned.
Underwriters at Lloyd’s of London say they have seen a “huge increase” in demand for cover from energy firms. But surveyor assessments of the cyber-defences in place concluded that protections were inadequate.

Since 2001, the American Center for Democracy has exposed and monitored threats to our right to speak freely and our political and economic freedoms. The ACD does more than identify individual, isolated threats; it also analyzes their synergistic effects on the economic security of the nation. The ACD’s projects and publications focus on early warning systems that alert the public and policy makers to prevent and mitigate threats