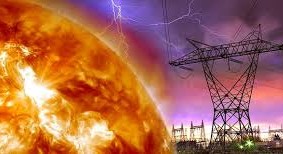 The US Senate Committee on Energy and Natural Resources will meet in full committee today to consider “Keeping the lights on – Are we doing enough to ensure the reliability and security of the US electric grid?”  ACD will broadly articulate and disseminate solutions for our nation’s continuing exposure to societal collapse from imminent threats to our electricity-dependent infrastructure by celestial Geomagnetic Storms or terrestrially-launched Electromagnetic Pulse (EMP) attacks.  Fully 17 of 18 national infrastructures are electricity-dependent.  A series of articles is herein undertaken mapping solutions.  To kickoff our series, John Kappenman and Phil Brooks describe the phenomenon, scope and solutions to counter these threats – namely by rendering our nation’s electric grid impervious to Pulse effects.  Subsequent articles will address solutions to vulnerabilities of specific key infrastructures based on their time-critical susceptibility to failure after a severe Pulse.

Vulnerability of US Society to Geomagnetic Storms, Electromagnetic Pulse (EMP)

Recent analysis carried out for the US FERC, the Congressional EMP Commission, FEMA (under auspices of US Presidential Executive Order 13407) and the US National Academy of Sciences has determined severe geomagnetic storms (i.e., space weather caused by solar activity) and EMP events (from a high altitude nuclear device detonation) have the potential to cause crippling and long-duration damage to the North American electric power grid.

Unlike the more familiar natural hazards or terror threats, both geomagnetic storms and EMP can have a large geographic footprint which can readily encompass major portions of the US electric power grid.  This wide spread and simultaneous disruption can cause correlated multi-point failures across the electric power grid resulting in not only the possibility of a large scale blackout of the electric grid, but also the risk of permanent damage to key apparatus constituting the backbone of the electric grid infrastructure.   The wide-spread permanent damage can cause an extremely slow pace of restoration from such a large blackout, causing multiplying effects that could hold our society at risk of catastrophic consequences, and recovery that could take years.

Electric energy supply is the largest segment of energy usage in the US economy accounting for nearly 40% of all energy consumed.  In contrast petroleum accounts for only 22% of current US energy consumption – which considerable US geo-political capital is expended to secure.  In addition, the operation of many other infrastructures is dependent on reliable and continuous supply of electricity to maintain their operational continuity.  Because of the underlying importance of this service, the electric power grid is a national critical infrastructure.  The loss of electric power can cascade rapidly into loss of all other vital infrastructures that supply potable water, perishable foods, perishable medications, transportation vital to maintaining a functioning society and as a result can place millions of lives at risk.

Present day electrical grids have not been exposed to such large events, nor has their design ever been modified to withstand these threats.  As recent detailed examinations have been undertaken concerning the interaction of these threat environments with power grids, the realization has developed that these infrastructures are becoming more vulnerable to disruption from these impulsive disturbance environments for a wide variety of reasons. 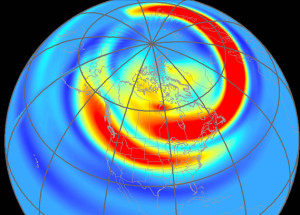 Geographic footprint of the 13 March 1989 Geomagnetic Storm.  A severe Storm is planetary in scope.  Image shows intensity of geomagnetic field disturbances in North America at 22:00 GMT.  Analyses of large historic storms indicate intensities of those storms posed a risk 3 to 10 times more severe than even this large storm, which disrupted power grids across North America.  Present day electrical power grids have not been exposed to such large events. Recent analysis indicates wide-spread, multi-year power outages are probable from damage due to these storms – a disintegrating force for our modern electricity-dependent society.

It is noteworthy that naturally occurring geomagnetic storms affect the power grid in a fashion similar to the late-time (E3) portion of an HEMP attack.  (A nuclear explosion produces electromagnetic effects of very short E1, intermediate E2 & longer E3 durations ranging from 5 nano-seconds to several hundred seconds.)  Of course, missile defense systems will not affect a geomagnetic storm – since it originates with the Sun.  Hardening the electrical power grid is the only effective strategy to cope with this ongoing, unmitigated exposure.  Fortunately, this also provides effective protection against the E3 HEMP – a ‘two for one’ solution. 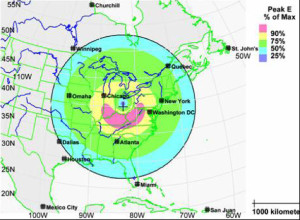 EMP risk comes from a variety of possible scenarios involving detonation of a nuclear weapon at high altitude (above 30 km).  This may result from an intentional attack by a rogue nation or a terrorist group.

An EM weapon causes an effect similar to the early-time (E1) portion of an HEMP attack.  Missile defense systems cannot prevent this attack either.  The only prevention is hardening exposed elements of the grid. Again, a ‘two for one’ benefit accrues in hardening the grid against an EM weapon pulse because this also eliminates effects of an E1 HEMP.

The severity of the hazards of geomagnetic storms, EMP and non-nuclear EMP for present day electrical power infrastructure worldwide has grown as grids themselves have expanded by a factor of 10 over the last 50 years.  Power grid design codes to account for these threats have never been instituted. Meanwhile, grids have become much more sensitive because microelectronic control systems have supplanted previous electromechanical relays & vacuum tube components – which could withstand higher levels of electromagnetic radiation.

It is still possible to remedy our circumstance with inexpensive solutions & protocols to harden both the current grid & future additions to this critical infrastructure.

* John G. Kappenman, Founder & Principal of Solar Analysis Consultants and one of the leading researchers on this topic, has provided testimony to Congress on several occasions and was a principle investigator for Congressional Commissions, FEMA, FERC and the National Academy of Sciences.

** Phil Brooks is Founder & Principal of GeoWater International which seeks to fund programmatic deployment of a paradigm-shifting water source to relieve potable water shortages in the United States and the world.  He has produced & directed a GWI video “Water Unlimited” depicting this opportunity.  A former airline pilot, Mr. Brooks has authored legislation & testimony for Congress on matters from aviation safety to US political letters. His writings have been reprinted in over 130 countries.