Abdullah Should Put His Money Where His Mouth Is 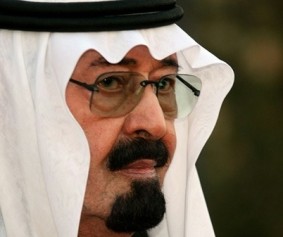 Vacationing President Obama conceded the obvious, “America cannot determine the future of Egypt,” he said. He went on to declare, “We don’t take sides with any particular party or political figure,” only to contradict himself by announcing the cancellation of U.S.-Egyptian joint military exercises “while civilians are being killed in the streets.”

The Saudis, however, have little doubt regarding the Brothers’ political agenda.

Saudi King Abdullah, re-iterated the Kingdom’s backing of the Egyptian military and “Egyptian brothers against terrorism, deviance and sedition and against those who try to interfere in Egypt’s internal affairs and its legitimate rights in deterring those tampering with and misleading its people.” He called “on the honest men of Egypt and the Arab and Muslim nations … to stand as one man and with one heart in the face of attempts to destabilise a country that is at the forefront of Arab and Muslim history.”

Jordan and the UAE (except for Qatar), which are also threatened by the Muslim Brotherhood’s calls for an “Islamic uprising (overthrowing the current rulers)” find Obama’s and European leaders’ support of the radical anti- Western Muslim Brotherhood difficult to understand.

There is growing critisim of American and European officials and commentators support of the Muslim Brotherhood’s “democratic” election and/or future participation in government. The Saudi Gazette pointed out, “The bloodshed … effectively ends the open political role of the Brotherhood, which survived for 85 years as an underground movement before emerging from the shadows after the 2011 uprising.”

The Saudi Ambassador to Egypt, Ahmad Qatar, “urged Saudi citizens to stay indoors and keep away from places of protests and clashes. He also instructed Saudi citizens “to call 00201124393333 for help anytime.” What will the Saudis do when the phone rings?

Realpolitik is the order of the day: U.S. interest is in keeping the Suez Canal open, the Camp David Accords intact, and the Sinai from becoming another, very large training ground for jihad against Israel, other Arab countries in the region, and the world over. Obama’s support of the Muslim Brotherhood seems to further weaken diminished U.S. influence in Egypt and the Arab world. This gives the Saudis a unique (ironic) opportunity to save Egypt from the claws of the Brothers that would turn it into an Islamic theocracy similar to and allied with Iran, Hamas, and the Taliban in Afghanistan.

As “oil-luck” has it, the Saudis have the funds to invest in this opportunity.

The Kingdom’s export revenues in 2012 amounted to  $330.4 billion. Immediate transfer (not promise) of $5-10 billion to the interim government in Cairo, seems to be a thrifty investment. The money should come with two stipulations.

The first would require the government to immediately pass on $400-$800 million to distribution centers throughout the country. Government employees should hand out $200 or $400 (which would cover one or two months rent of a small apartment, outside Cairo) to each of Egypt’s 20 million registered unemployed and underemployed.

The second stipulation would require immediate hiring of workers to repair infrastructure and reopen manufacturing centers, build/open schools, health clinics, hospitals and begin other projects that create work. Immediate distribution of cash and jobs will allow the government to move millions, now dependent on the Brothers charity, off the streets. At the same time, new plans to reform the economy should be announced, to reassure Egyptians that they would be able to feed their families and secure their welfare.

The Brothers incite the masses to violence, using them as a spearhead to delegitimize the security services and undermine the government. But as we have witnessed over the last month, most Egyptians resent the Brotherhood’s systemic destruction of the economy, which forced many into poverty. While there are no guarantees, it seems that an immediate and secured supply of cash could move millions of the Brothers’ supporters/dependents from the streets into queues outside the government’s money and jobs distribution centers.

If the masses turn their back on the Brothers, the government efforts to end the violence and suppress the Brotherhood are more likely to succeed. No one expects the Brothers will disappear. Those who survive will go underground to continue their agitation as they have done before.

However, with enough money to feed their families, the majority of the Egyptian people, those who celebrated the ousting of Morsi and his Brothers last July, are likely to support the government’s efforts to secure the streets and revive the economy.

Bailing out the Egyptian government, the economy and the people will not solve all of Egypt’s problems. But a solid bank account would help calm the improvised demonstrators in biggest and most important Arab country. The Saudis have the cash and the chance to help not only the Egyptians, but also to secure themselves.