A Navigation and Timing Primer: Concepts and Misconceptions

This paper attempts to establish a common base of terms and concepts related to navigation. It is intended to set the definitions and principles which will enable rational discussions of navigation issues, such as the search for alternatives to GPS.

I. Introduction – Navigation is recognized as an important activity by almost everyone associated with transportation, logistics, military operations, and, even driving an automobile. In particular, the introduction of low cost GPS navigators containing detailed maps and sophisticated navigation algorithms has brought computer-based route finding to the masses. The fact that most people refer to the navigator attached to the windshield of their automobile as my GPS, however, shows that most have little understanding of navigation principles. I will begin by defining navigation as:

The art, or science, of generating a set of instructions that are useful for enabling the process of moving a person, or a vehicle, from one location to another.

Note that identifying the locations, which may be the end points, or intermediate points, of a journey, is not, in itself, navigation, although the specification of end and intermediate points may be a necessary feature of navigation. A person who creates the instructions is usually referred to as a navigator. Recently, however, the term haas been applied to an electronic device which creates such instructions using digital maps and computer algorithms. In this article, the person will be identified as a navigator, and the electronic device will be identified as a navigation system Components and processes related to navigation will be discussed below.

II. Necessary Information –  It was asserted that a navigator uses locations to aid in generating navigation instructions. Given that the universe is a large place, a location is, in general, defined relative to the origin of a convenient coordinate system. A description of accepted methods for choosing a coordinate system and relating it to a location on the surface of the earth, not too detailed or mathematical, is given by Kaplan and Hegarty[1]. The description is specifically related to the global positioning system(GPS), but it is broad enough to apply to navigation in general. A more detailed discussion, also related to GPS can be found in [2]. The coordinate systems accepted as standard for navigation purposes are the Earth-centered-inertial, ECI, system which is convenient for specifying satellite orbits, and the Earth-centered, Earth-fixed, ECEF, which rotates with the earth and is convenient for defining positions on the earth’s surface.

Additionally, one requires a model of the earth which includes its non-spherical shape. The standard model for the earth is the Department of Defense, DOD, World Geodetic System of 1984, WGS-84. This description also includes a more detailed model of the earth’s gravitational irregularities, and is, therefore, useful for both satellite-based and inertial-based measurements and for calculating satellite orbit irregularities. Using these reference systems, one can specify locations on the earth’s surface and altitudes above mean sea level extremely accurately.

III. Positioning – For the purposes of this paper, two types of positioning will be defined:

Absolute positioning provides the location of a specific point relative to the origin of a coordinate system defined as described in the preceding section. The location is determined by applying straightforward algebraic, or trigonometric calculations to measurements made by a set of devices. Relative positioning is the specification of a location relative to a previously measured location. The measurements supplied by devices related to relative positioning require, in general, processing using methods of differential and integral calculus. Figure 1 shows devices which have been used to provide absolute positions. Measurements enabled by these devices, typically, provide bearing angle, or range, to a known position. If this information is known for, usually, three, or more, of these devices, determining position is only a matter of applying the Pythagorean theorem, or a trigonometry relation.

Devices used to provide relative positioning are shown in fig. 2. These devices are, basically, motion sensors, not position sensors. Determining ones position with them requires knowledge of an earlier position to which the relative displacement can be applied.

It should be noted that none of the other devices in fig. 1 or in fig. 2 are navigation systems. Rather, they may be described as enablers, or components, or navigation aids of a navigation system. This distinction has led to some confusion in the naming. Several high ranking officers prevented the GPS from being named a navigation system at the beginning of the program, forcing the use of positioning, rather than navigation. More recently, the misleading acronym, GNSS, which stands for Global Navigation Satellite System, no doubt to cast doubt on American primacy in the field, has been created.

A true navigation system is shown in fig. 3[3]. The device receives signals from GPS satellites, processes them to obtain a position, and uses a digital map and rather complex algorithms to produce a set of instructions for proceeding from the current location to a specified destination. The instructions are, then, projected in a computer voice through a built-in speaker when action is required.

IV. Concluding Observations and comments – All of the devices shown in fig. 1 and fig. 2 have had their day in the sun. With the exception of the satellite and the MEMS accelerometer, they represent obsolete technologies. 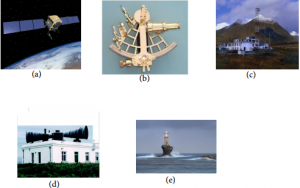 Figure 1: Devices used to provide data for absolute positioning: (a) is a GPS satellite (b) is a sextant (c) is an e-loran station,(d) is a foghorn building (e) is a lighthouse. 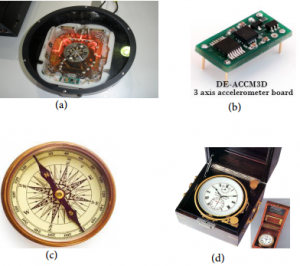 Figure 2: Devices used to measure relative position. (a) is a ring laser gyroscope, (b) is a MEMS solid state accelerometer. (c) is a magnetic compass, (d) is a marine chronometer.

One absolute device, though, deserves mention. That is Loran and its more modern version e-loran. Both are based on World War II technology. E-loran is claimed to be an improved version which has a timing component, although the accuracy with respect to UTC is only 50 ns, at best. Position accuracy is only two-dimensional, is said to be 8-20 meters, and there is no vertical component. It may be useful for surface vehicles, such as large ships, but it is inadequate for modern applications, such as instrument approach and weapon delivery. The system has been activated in a few maritime areas of Europe, but the reasons are rather obscure. It has poorer characteristics than the GPS of,   perhaps, 25 years ago.

There are, of course, applications needed in areas where it is not possible to use an absolute device, such as a satellite-based system. Submarine navigation has been an area where inertial instruments have flourished. Too, new research results, such as atomic interferometry, have promise for improving accuracy. Still a position reference will be required.

Satellite-based navigation is, itself, beginning to show its age. Government organizations have been thrashing about for years, now, in an attempt to find devices that can provide navigation information if satellite signals are not available. The thrust appears to be to develop relative navigation instruments to operate in areas where satellite signals are jammed, or blocked, say by buildings or vegetation. It appears to this author, however, that one should search for ways to harden and extend the satellite signals, rather than to adopt the current attitude of surrendering to an unknown foe.

After all, it is true that the one-way ranging and timing technology used in satellite-based navigation at present is more than 40 years old. It is becoming obvious that it may need modification, or, at least, assistance. Network aiding and small server satellites are possibilities.

The frenzied search to find a replacement as accurate and as inexpensive is, very likely, doomed. Our current methods need a friend, not a substitute.

[3] See www.garmin.com/ for a full description.